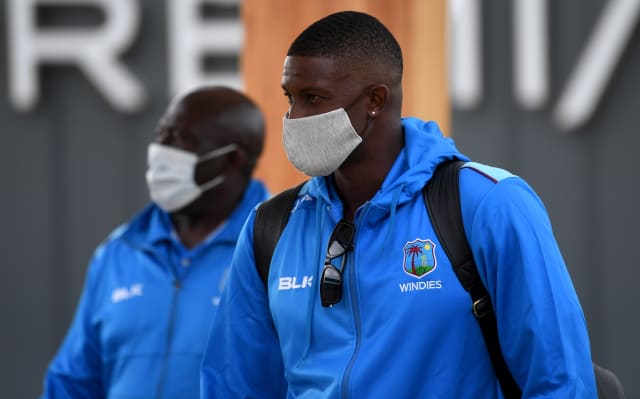 Cricket made a welcome return to English soil on Tuesday, with the touring West Indians kicking off a three-day intra-squad warm-up match at Emirates Old Trafford.

The coronavirus crisis has meant no significant top level cricket anywhere in the world since the Pakistan Super League was shut down in mid-March, with this tune-up marking a major staging post before next month’s ‘bio-secure’ Test series against Joe Root’s England.

The tourists, who have combined their mandatory 14-day quarantine with a training camp in Manchester, finally got their chance for a proper workout in the middle as Kraigg Brathwaite’s XI reached 54 for two at lunch against Jason Holder’s XI.

While it was refreshing to see teams back on the park and hear leather on willow once again, the sight of both sides lining up in maroon and navy training kit – with several players wearing shorts and a couple donning hooded sweaters in the outfield – provided a reminder that these are still baby steps towards the real thing.

Test captain Holder was in charge of a side containing the majority of the squad’s first-choice bowlers and duly opted to field first against a team stacked with senior batsmen.

Kemar Roach started well, bowling with good pace and giving little away, while Shannon Gabriel worked through the gears as he continued his comeback from an ankle injury. It was the Trinidadian who claimed the first wicket of the summer, going short to John Campbell, whose attempted pull sailed off the top edge straight to Alzarri Joseph at mid-wicket.

That completed a 16-ball duck for the left-hander, who will be hoping for a second chance before the game is completed.

Gabriel almost had Brathwaite with his next delivery, but the chance went down at third slip. With sound echoing around the deserted ground it was possible to hear a lively but good-natured welcome for new batsman Shamarh Brooks.

He took time to settle against change bowlers Alzarri Joseph and Preston McSween, the latter finding good swing out of the hand, but found some rhythm with back-to-back boundaries off the returning Roach. Brathwaite had settled into his usual solid routine by now, and was watching on as Gabriel removed his partner for 17 with the second ball of his new spell.

The ball kicked outside off stump, took the edge and sailed easily into the gloves of Joshua da Silva.

Brathwaite reached the break on 28 from 84 balls, with Shai Hope in support.