Leicester continue limp towards Champions League with draw against Brighton 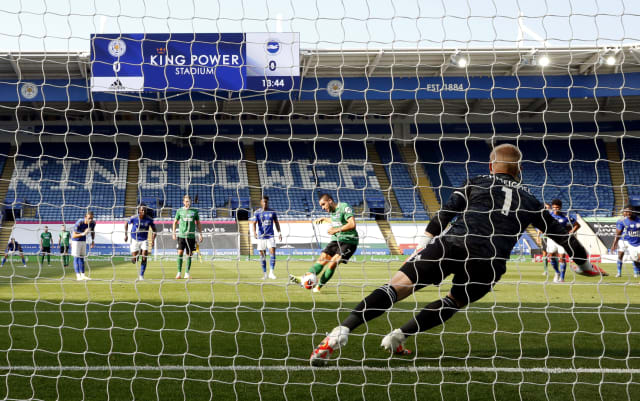 Leicester’s limp towards Champions League qualification continued with a goalless draw against Brighton as Kasper Schmeichel saved a first-half penalty.

Brendan Rodgers’ side have now won only two of their last 10 games as they look to seal a top-four finish in the Premier League.

It could have been a fifth defeat in that sequence had it not been for Schmeichel. The Denmark international smothered Neal Maupay’s penalty after 14 minutes, holding on to the shot down to his right.

Maupay’s miss could leave Brighton thinking about what might have been as three points would have given them significant breathing space in the battle for survival.

Meanwhile, Leicester, who were strong favourites to finish third at the turn of the year, lacked a cutting edge throughout and are now looking over their shoulders at fourth-placed Chelsea – who visit the King Power Stadium in the FA Cup quarter-finals this weekend.

Brighton began brightly with a flurry of efforts, all of which were repelled by the Leicester defence.

Their early endeavour looked like it would be rewarded after Aaron Connolly chased a long pass forward by Aaron Mooy and was clumsily brought down by James Justin.

The Video Assistant Referee checked the penalty decision but referee Lee Mason’s award of the spot-kick stood, only for Schmeichel to save from Maupay.

It was a let off for Leicester but a poor penalty from the Brighton striker, with Schmeichel not needing to stretch or extend himself to keep it out.

Brighton, who had to make a change at centre-half with Shane Duffy replacing the injured Adam Webster, threatened again through Connolly midway through the first half when he once more broke through the heart of the Leicester defence, but his effort was deflected wide by the recovering Caglar Soyuncu.

Leicester offered little in the first half, with Jamie Vardy and Kelechi Iheanacho largely anonymous and starved of service.

However, they could have taken the lead in injury time but Soyuncu got his header from close range all wrong after a Wilfred Ndidi shot looped towards him at the far post.

The hosts looked a little more lively as the second half got under way and Ben Chilwell, on the scoresheet in the 1-1 draw at Watford on Saturday, spurned a good chance.

Vardy headed the ball back across goal and Brighton failed to clear it properly, allowing Chilwell a strike at goal, but the left-back snatched at his chance.

Another Vardy lay-off sat up invitingly for James Maddison to strike but he too rushed his effort and fired his 25-yard shot wide.

Brighton’s menace had waned, despite boss Graham Potter freshening things up with a triple substitution just before the hour mark, but Leicester were unable to make their growing possession stats tell on the scoreboard.

Maddison, regularly lethal with free-kicks just outside the penalty area, put the ball in the empty stands again with 10 minutes left.

Leicester felt they should have had a penalty in injury time when a Maddison cross struck Lewis Dunk on the arm but referee Mason waved away the appeals.