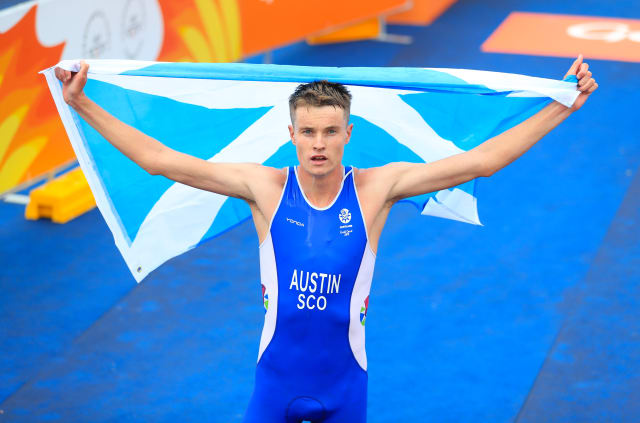 Commonwealth Games triathlon medallist Marc Austin has retired at the age of 26 after developing a heart condition.

Austin, who won bronze for Scotland at the 2018 Games, has been diagnosed with arrhythmogenic right ventricular cardiomyopathy (ARVC), a rare genetic heart disease.

Austin had a year out of action after reporting some “strange heart malfunctions” but had reported getting the all clear in September 2019 and declared himself “keen for some 2020 action”.

“Unfortunately, having been diagnosed with ARVC, I have decided to no longer pursue a career as a professional triathlete,” he said in a statement.

“I achieved way more than I set out to do as a young athlete and loved every moment.

“I hope to stay involved in the sport in some capacity as it is something I love and want to remain a part of. Thanks to everyone who played a part in my career over the years.”

Austin shot to prominence in the 2014 Commonwealth Games as he broke away from the field at Strathclyde Park with Alistair and Jonathan Brownlee but eventually finished in 22nd place.

However, he finished ahead of both English brothers at Gold Coast four years later.

He regularly competed for Great Britain at the ITU World Cup and World Triathlon Series events and won 15 medals on the world stage overall throughout the age groups into senior competition.

Fiona Lothian, Triathlon Scotland’s head of performance, said: “Marc’s outstanding bronze medal at the Gold Coast 2018 Commonwealth Games, achieving Scotland’s first medal of the Games and a first ever Scottish medal in triathlon, will go down in history.

“We are saddened that his racing career has been cut short at an early age and he will no longer be able to compete on a world stage. Marc has already started to support the next generation of Scottish triathletes who are part of the group he trained with in Glasgow.

“We look forward to working with him in this capacity in the future as his enthusiasm and experience are invaluable. We wish him all the best for the future, and we will work with British Triathlon to support him as he transitions into a new phase of his life.”