On this day in 2013: England fall to five-run defeat in Champions Trophy final 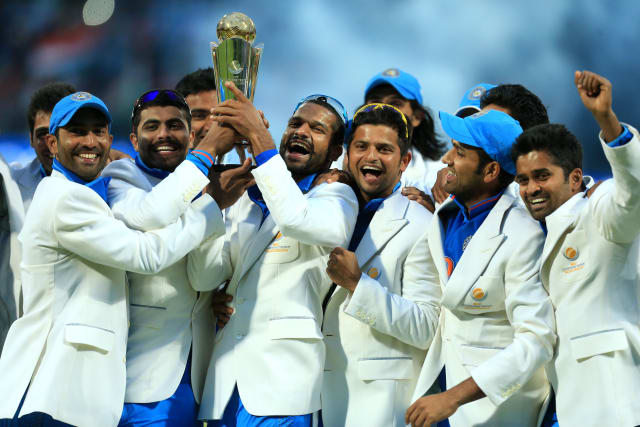 England’s quest for global one-day international honours went on after a dispiriting defeat to India in the Champions Trophy final on this gloomy day seven years ago at Edgbaston.

In a match that was reduced to 20 overs per side because of rain, England managed to get the equation down to 20 required from the final 16 balls only to spectacularly implode as India claimed an unlikely five-run victory.

Route to the final

This was far from a vintage tournament for batsmen, with only three centuries. Two of them came from the blade of Shikhar Dhawan, who tonned up against South Africa and the West Indies before India made it three wins from three with victory over Pakistan. Crowd trouble marred their semi-final success over Sri Lanka but they had rarely been stretched. England saw off Australia after which David Warner aimed a punch at Joe Root in a Birmingham nightclub, before a loss to Sri Lanka was followed by victory over New Zealand. Jonathan Trott, an assured presence during the tournament, made 82 in a semi-final win over South Africa after James Tredwell’s impressive three for 18.

England shine after the rain

The Sunday final looked set to be a damp squib as the forecast rain fell for much of the morning and afternoon before relenting and allowing play to get under way six hours after it was due to start. A truncated fixture on a crumbly pitch went on to offer assistance to bowlers on both sides, and on which England captain Alastair Cook decided he would be more comfortable chasing. India looked well positioned but a mid-innings collapse saw them lurch from 50 for one after 8.1 overs to 66 for five after 13 as Tredwell (one for 25) and Bopara (three for 20) tightened the screw. Ravindra Jadeja’s 33 not out from 25 balls would help India to 129 for seven.

England in a spin

It was the sort of total that on another day, under much less pressure, England would have breezed to – even without the firepower and aggressive mindset the contemporary bunch possess. The tournament hosts were firm favourites with 16 balls to go, with two set batsmen in Eoin Morgan and Bopara, but the wheels came off in arresting fashion. Ishant Sharma accounted for both batsmen while Jadeja (two for 24) and then Ravichandran Ashwin (two for 15) helped India over the line, England crumbling from 110 for four to 124 for eight. It was a fifth straight defeat in major ODI finals and arguably the most deflating.