Nascar drivers unite in show of solidarity for Bubba Wallace 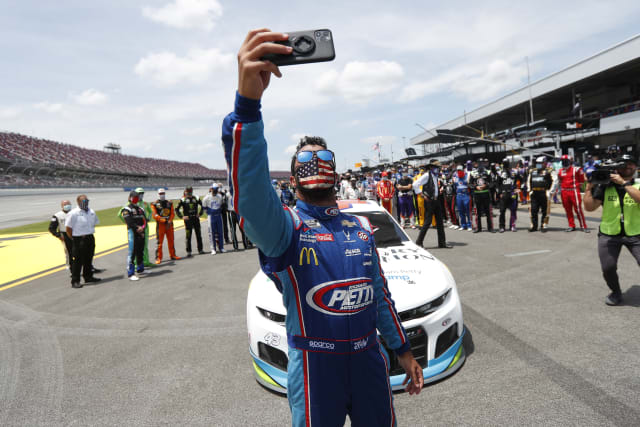 Fellow drivers united behind Bubba Wallace prior to Monday’s Nascar race at Talladega as investigations continued into the noose left in the garage of the association’s only black full-time driver.

Dozens of drivers pushed Wallace’s number 43 car to the front of the field at the Alabama speedway in a show of solidarity with the 26-year-old, who was made visibly emotional by the gesture.

It came as the FBI launched an investigation into who left the noose in Wallace’s team garage on Sunday.

The act followed a successful campaign by Wallace to have the Confederate flag banned from Nascar events in the wake of the Black Lives Matter movement.

In a statement released soon after the noose was discovered, Nascar said: “We are angry and outraged, and cannot state strongly enough how seriously we take this heinous act.

“We have launched an immediate investigation, and will do everything we can to identify the person(s) responsible and eliminate them from the sport.”

Wallace later issued a statement of his own on social media, saying he was left “incredibly saddened” by the incident.

“(It) serves as a painful reminder of how much further we have to go as a society and how persistent we must be in the fight against racism,” he said.

A host of other drivers also took to social media to express their support for the 26-year-old.

Ryan Blaney, who went on to win Monday’s race, called Watson his “brother”.

“You’re my brother and always will be,” he tweeted. “Don’t let the people who are lower than life to try and bring you down. They won’t scare you because you’re strong. I stand with you pal. Forever.”

Alex Bowman also expressed his appreciation for Watson’s efforts in fighting for what he believed in.

He said on Twitter: “We may not always get along the greatest, but I have a ton of appreciation for the person @BubbaWallace is and everything he’s doing to push us all to be better.”

Watson went on to finish Monday’s race in 14th place.

Meanwhile, Talladega County Sheriff Jimmy Kilgore said Nascar had contacted the FBI, which was handling the investigation into the noose.

The FBI field office in Birmingham did not immediately return a message.

The incident has rocked Nascar, which returned to racing just last month because of the Covid-19 pandemic.