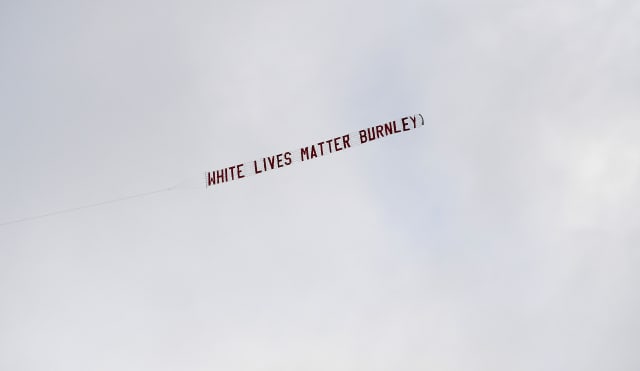 Burnley captain Ben Mee admitted he was ashamed after an offensive banner was flown over the Etihad Stadium during the team’s 5-0 thrashing by Manchester City on Monday evening.

A plane carrying the message ‘White lives matter Burnley’ flew over the ground in the early stages of the team’s first Premier League outing since the competition’s restart.

It occurred just moments after all players had taken the knee in support of the Black Lives Matter movement at kick-off.

The club issued a strongly worded statement before the end of the game and Mee revealed his embarrassment afterwards and felt it had affected the team’s performance.

“It definitely had a had massive impact on us to see that in the sky. We were embarrassed, disappointed, upset. We are embarrassed that our name was in it.

“That they tried to attach it to our club. It doesn’t belong anywhere near our club. Fans like that don’t deserve to be around football.”

Clarets manager Sean Dyche, who did not see the plane at the time, was also disappointed about the incident.

Dyche said: “As a club we can only apologise. It is unacceptable.”

The club statement added the perpetrators were not welcome at Turf Moor and would be banned for life if identified.

“This, in no way, represents what Burnley Football Club stands for,” it read.