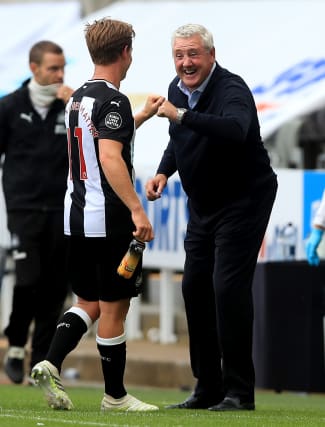 Sunday’s 3-0 victory against Sheffield United was Newcastle’s biggest Premier League win in over a year and underlined the good work Steve Bruce has done at St James’s Park in his first season in charge.

Here, PA Media takes a look at some of the things that have seen Bruce succeed since taking over from Benitez last summer.

The most important factor is that Bruce’s record so far is better than that of his predecessor. After 30 matches, Bruce has amassed 38 points. At the same stage in the two seasons of Benitez’s reign the Spaniard managed just 32 and 34 points in the Premier League.

When Ayoze Perez and Salomon Rondon left last summer, so did 55 per cent of Newcastle’s goals from the 2018/19 campaign. The problem of trying to fill such a void immediately made Newcastle relegation candidates this season, but Bruce has comfortably steered the club clear of danger. New players such as Joelinton, Allan Saint-Maximin and Jetro Willems have had to be integrated quickly while Miguel Almiron has needed more time to settle down, having been signed by Benitez.

Did not change things for the sake of it

One of the key things for Bruce has been that the players quickly bought into his methods. After attempting to change Benitez’s preferred 5-3-2 formation to a back four, Bruce realised the players were comfortable lining up that way. He has unfairly been accused of simply copying Benitez’s tactics, but Bruce has tweaked the system. One of the main differences is that he has encouraged the wing-backs to be more offensive.

Bruce has been his own man

The 59-year-old has many strengths. He has overseen 900-plus games in his managerial career and is an experienced man-manager. Bruce has shown he is capable of maximising the squad’s potential with clever tactics, detailed coaching and organisation and his warm, generous nature has got the players playing for him.

Despite his Geordie roots, Bruce’s arrival did not go down well with Newcastle supporters. Much of the St James’s Park faithful saw him as an unambitious appointment, a journeyman boss who had not managed in the Premier League for four years who was now the public face of Mike Ashley. Bruce is thick-skinned and he has needed all the diplomatic skills he showed at Hull, where he also worked under an unpopular owner.