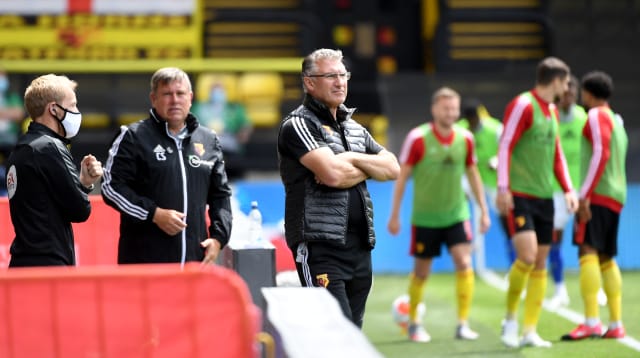 Watford head coach Nigel Pearson was pleased with how his players dealt with the lack of supporters at Vicarage Road as his relegation-threatened side sealed a last-gasp point against Leicester.

Ben Chilwell thought he had won the game for the visitors as he struck in the last minute, only for Craig Dawson to secure a 1-1 draw with an acrobatic finish deep into stoppage time.

The share of the spoils could prove vital to Watford in their battle to avoid the drop as both sides contested their first games back since the Premier League returned following the coronavirus outbreak.

Pearson’s side shocked champions-elect Liverpool with a 3-0 win in their last home game and took another point from a high-flying side before the former Leicester boss praised his squad.

“It is not easy,” he said of playing in a near-empty stadium.

“I am not going to hide from that. You have got to remember there are a lot of players who respond to the emotional attachment of an atmosphere.

“The global pandemic we are experiencing has put many industries at risk and we are not immune to that so it is important that we do find solutions, it is not something the players would choose to be the case.

“It is certainly not the same without our fans, it is what all this game is for – the supporters.

“It is not straightforward but I am really pleased with how the players have detached themselves from the potential negatives of the situation and still performed.

“I think we played well today against a side having a successful campaign, it is an important point for us.”

If there were supporters inside the ground they would have erupted when Dawson scored his first goal for the club in thrilling circumstances.

After Chilwell’s fine strike, Watford’s heads could have dropped but they stuck to their task and were rewarded with a point.

“I think it won’t always happen like that,” Pearson added.

“Sometimes you have a setback and you aren’t able to respond, today we were and it is an illustration of the belief we have at the football club.”

Foxes boss Brendan Rodgers felt his side should have been heading back up the M1 with all three points, having earlier seen a Marc Albrighton strike cannon back off the inside of the post.

“I felt we were deserving of the win, especially in the second half as the game went on, we showed a real level of fitness,” he said.

“We score an absolutely brilliant goal right at the end that I thought we were deserving of. We had dealt well with crosses into the box all game, analysing it back the luck went against us.”

Asked if he was disappointed with his players for the way they let their late lead slip, Rodgers added: “I think on this occasion the players have done everything they could, it was just really bad luck.

“It is not one of those you can analyse, we defended the crosses very, very good for most of the game. Just with that one the luck wasn’t with us.

“We wanted the three points, I thought we were deserving of it, but if you can’t win you make sure you don’t lose and we end up taking a point, which takes us closer to where we want to go with a game less.”