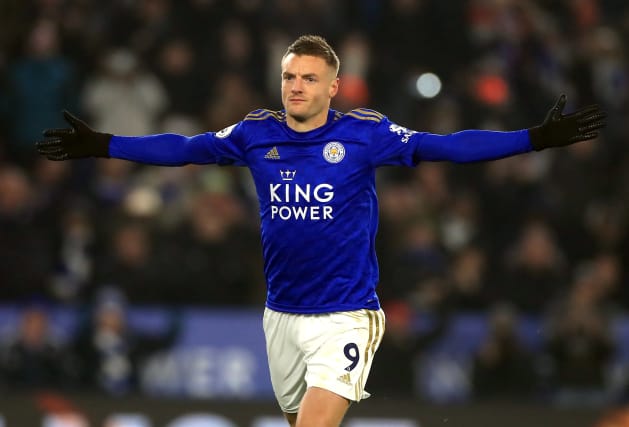 Leicester boss Brendan Rodgers is backing striker Jamie Vardy to cruise past 100 Premier League goals and continue to terrorise defenders beyond that landmark.

The 33-year-old frontman was left stranded on 99 top-flight strikes when the current campaign was put on pause and will be keen to address that issue immediately on his return when the Foxes head for Watford on Saturday.

However, Rodgers is not expecting him to rest on his laurels should he do so.

He said: “His story is absolutely phenomenal when you think he stopped playing non-league at 25. It shows you the talent that guy has, and his spirit and drive.

“There’s absolutely no doubt he will get to that (100 goals) and I’m pretty sure he will go well beyond it.

“Thankfully he still has the hunger and drive to continue and he’s still super-fit and super-fast. He looks after himself and I think he’s enjoying every minute of being back training. I’m sure he will get back to the level he was at very quickly.”

Vardy will hope to pick up were he left off having scored twice in Leicester’s 4-0 win over Aston Villa before the break to take his tally to 19 for the season, although they were his first goals of the calendar year.

If he does, he will disappoint the man who took him to the club in the first place, current Watford boss Nigel Pearson, who is currently attempting to dig the Hornets out of a hole.

Pearson is credited with laying the foundations for the Foxes’ remarkable surge to a shock league title in 2016 and his legacy at the King Power Stadium is in little doubt.

Rodgers said: “The players here have nothing but respect for Nigel. Nigel did an outstanding job here over two periods and I know he’s held in high regard here.

“Obviously the players that he’s worked with for long periods respect the work he’s done.

“Watford were in a very difficult position when he came in, and he’s galvanised them and got them organised.

“They’re a very good side – they finished above us last season, they got to the FA Cup final, so he’s gone in there and got them organised and playing to their maximum and they’ve got some excellent results. We go there knowing it will be a very tough game.”