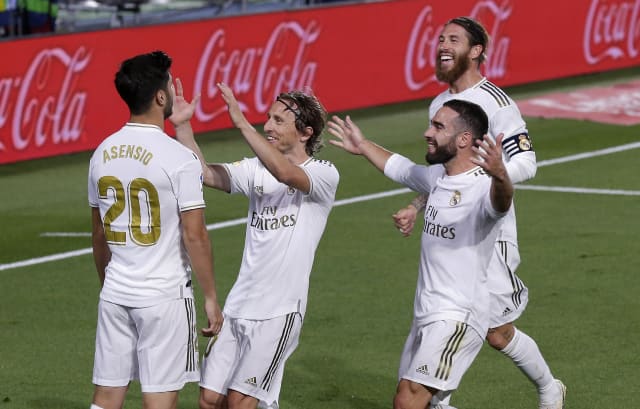 Marco Asensio spoke of an “emotional and satisfying goal” after finding the net with his first touch in a year as Real Madrid beat Valencia 3-0.

Asensio ruptured the anterior cruciate ligament in his left leg during a friendly with Arsenal last July and marked his comeback, as a 74th-minute substitute, with a stylish volley seconds after taking the field.

It was a cathartic moment for Asensio, who smiled widely as he ran to celebrate, and a joyous one for his team-mates.

Speaking to the Real Madrid website, he said: “I couldn’t wait to get back, it’s been months of hard work.

“It was emotional and so satisfying to be back out there. I’m thrilled to have been able to play, with the goal and the team win. The most important thing is we got the win and I feel in good shape heading into the closing stages of the season.”

Rodrigo thought he had opened the scoring in the 22nd minute finding the back of the net with a neat touch from Carlos Soler’s pass only for VAR to step in and determine Gomez had been both active and off-side.

Real reclaimed the initiative at the start of the second half, Daniel Carvajal bombing forward at will and Sergio Ramos finding himself closing in on goal, only for a poor touch to let him down.

In the end it took an error from Valencia substitute Kevin Gameiro to open up the game, a wayward ball gifting Hazard the chance to counter at speed down the left.

The Belgian produced a neat give and go before touching the ball into Benzema’s path before the centre forward finished first time.

Asensio’s long road back ended when he replaced Federico Valverde in the 74th minute and he had been on for mere moments when he lashed home Ferland Mendy’s cross.

Benzema finished things off with a powerful strike but Valencia’s travails were not yet over, substitute Kang-in Lee sent off in the closing minutes for hacking at Ramos.

Asensio said: “It was a great display all round. We started very well and then Valencia pushed up and created chances.

“In the second half we knew we had to push on and we finished the game brilliantly.

“We have nine finals to come, nine games we have to win and now we’ll focus on Real Sociedad, which is the next objective.”

Manager Zinedine Zidane said: “It means a lot, especially for him.

“We are happy to see Marco on the pitch after eight months and to score a golazo on his first touch.