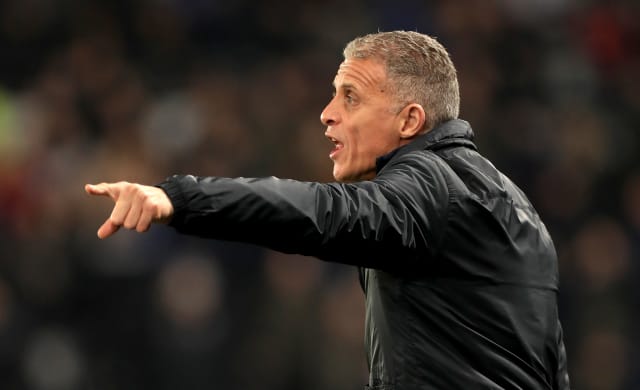 Northampton fans might be missing from the PTS Academy Stadium on Thursday, but Keith Curle believes his players will be inspired for their League Two play-off tie with Cheltenham after building stronger bonds with supporters during lockdown.

This season will see a play-off campaign like no other, with Northampton, Cheltenham, Colchester and Exeter returning from three months off to play two games in five days that will define their season and beyond as they chase promotion to League One.

On top of the usual tension of a play-off campaign, players and managers must work out how to handle playing behind closed doors. Curle, for one, said the pandemic had shifted his perspective.

“I’m a people person and I like being around people but the last few months have given me time as well to re-evaluate certain things,” the Cobblers boss said.

“I mentioned very early on when I came to the football club that we needed to have a unity and create our own identity and I think the work the players have done on and off the pitch with the supporters has really been appreciated.

“They won’t be here on Thursday night but we know wherever they are they will be right behind us willing us on.”

All four clubs must adapt to playing behind closed doors, but the focus is on the two clubs at home on Thursday.

Though the stands of the JobServe Community Stadium will be silent, populated only by a few cardboard cut-outs of fans, Colchester boss John McGreal is confident his players can create an atmosphere of their own against Exeter.

“It’s going to be different but when it comes to it, it’s still a play-off game and an opportunity to get promoted,” McGreal said in the Daily Gazette.

“That’s what we’ve been trying to put into the players and to go and play our way of football.

“Even though there’s not going to be an atmosphere here, we have to try and generate our own atmosphere and the vibes have been excellent.”

Colchester and Exeter drew their two games this season, though with three months having passed since the last ball was kicked in anger, any study of the form book seems pretty meaningless.

That is good news for Northampton, who lost five of their last seven in the league prior to the shutdown, while Cheltenham had been flying, winning five out of six.

Though all four clubs have reported fully fit squads, the concern for all is keeping players fit as they come back from a long lay-off into two huge games in just a few days.

“There are people carrying niggles,” Cheltenham boss Michael Duff said. “We’ll have to assess where certain people are. Different people come back at different levels of fitness just because they’re 25 different human beings. As a general rule we’ve been really happy with them.”

And Exeter boss Matty Taylor suggested squad depth could be key to determining who advances to the final at Wembley on June 29.

“I can imagine both teams will look totally different in the second leg – to play two games in four days after 12 weeks off is unheard of, let alone two play-off games,” he said.

“We’ll have to see where the fatigue and energy levels are at after the first leg. We’ve got to take care of what’s in front of us.”