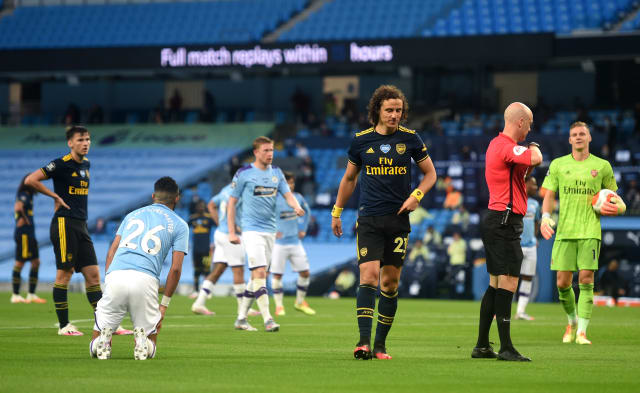 After ‘Project Restart’ began with a scoreless draw between Aston Villa and Sheffield United, there was plenty to talk about as the Etihad Stadium witnessed the first Premier League goals in 100 days.

City emerged 3-0 victors against Arsenal in front of empty stands as Pep Guardiola comfortably overcame former assistant Mikel Arteta, who saw substitute Luiz unravel as he gave away goals either side of half-time and got sent off.

The result meant Jurgen Klopp’s men cannot seal the title at Everton this weekend, even though it remains a matter of when rather than if the Premier League trophy leaves the Etihad Stadium for Anfield.

Luiz’s disastrous display came on a night of three serious-looking injuries, with the Brazilian replacing Pablo Mari in a match book-ended by Granit Xhaka and Eric Garcia leaving on a stretcher.

The Brazil international may well have wished he stayed on the padded, social-distanced bench after undoing Bernd Leno’s good work by failing to deal with a ball that Raheem Sterling fired home late in the first half.

Things got worse for Luiz shortly after the restart. After receiving a red card for bringing down Riyad Mahrez in the box, Kevin De Bruyne slotted home the spot-kick and substitute Phil Foden scored in stoppage-time to rub salt into Arsenal’s wounds.

This was football but how we knew it in March. Social distancing was in operation as the top-flight resumed amid the pandemic, with the stadium split into zones, hygiene stations dotted everywhere and banners replacing fans in the stands.

It was a surreal experience inside the Etihad Stadium, where the 300-or-so in attendance fell silent before kick-off to remember City great Glyn Pardoe and those impacted by Covid-19.