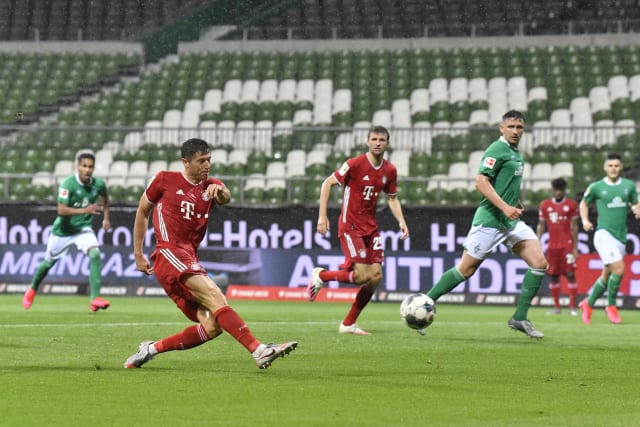 Bayern Munich have been crowned Bundesliga champions for an eighth successive season after a 1-0 win at Werder Bremen.

Their domination of German football does not look like ending any time soon as an 11th win on the bounce means Borussia Dortmund can no longer catch them.

It was fitting that it was Robert Lewandowski’s goal that earned the glory, with the Poland striker’s 31st league strike of the season enough to see off struggling Bremen – even a red card for Alphonso Davies late on could not sour the evening.

This is Bayern’s 29th Bundesliga title but the manner of this one, with a three-month suspension, will live long in the memory thanks to the scintillating style of play introduced by new boss Hansi Flick, who took over from Niko Kovac in November.

They have been particularly fearsome since the restart last month and on this form will be strong contenders to win the Champions League later this summer.

Borussia Monchengladbach strengthened their Champions League hopes with a 3-0 win against Wolfsburg.

Jonas Hoffman’s two first-half goals put them in command before Lars Stindl made it a comfortable evening.

In Spain’s LaLiga, Carlos Bacca’s early close-range finish was enough to give Villarreal a 1-0 win over Mallorca, while 10-man Espanyol, who had Bernardo Espinosa sent off in the 16th minute, held out for a 0-0 draw at Getafe.