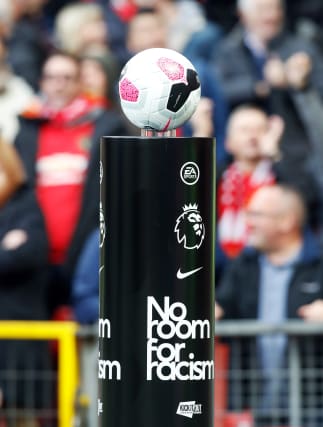 Show Racism the Red Card has asked the Premier League to auction off players’ specially designed shirts to raise money for anti-racism causes.

The charity’s chief executive Ged Grebby has written to Premier League counterpart Richard Masters to see if SRtRC, Kick It Out and clubs’ community departments could benefit from cash raised from the shirts.

Players’ names will be replaced on the back of their shirts with ‘Black Lives Matter’ for the first 12 matches of the restarted top flight season.

The league will also support any player who chooses to take a knee before or during matches, as Real Madrid’s Marcelo did after scoring in Sunday’s 3-1 LaLiga win over Eibar.

Grebby wrote in a letter to Masters: “We welcome the Premier League’s decision to feature ‘Black Lives Matter’ on the back of players’ shirts but would like to offer the suggestion that the shirts are then auctioned off to raise funding for anti-racism organisations.

“Race hate crime has doubled over the last five years and the demand for SRtRC’s education work has never been greater.

“Our model has proven impact across the UK over the last 25 years, using the high profile of football to deliver high quality and effective anti-racism education.”