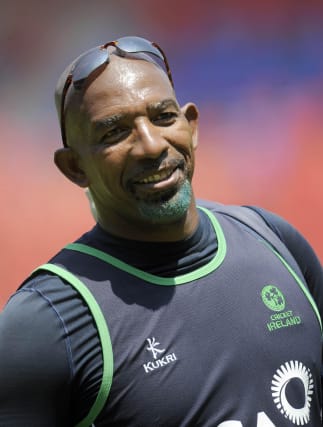 West Indies head coach Phil Simmons has revealed how “explosive” games of dominoes are playing their part in helping his players avoid cabin fever during their quarantine at Emirates Old Trafford.

A 25-man squad landed in Manchester on Tuesday ahead of next month’s Test series, heading straight to Lancashire’s ground where they are combining a training camp with a mandatory 14-day quarantine.

A normal tour of England would involve a variety of cities, restaurants and tourism opportunities but by training and staying on-site in a ‘bio-secure’ bubble for the duration of the trip, the possibility of restlessness is one Simmons is well aware of.

And while the England and Wales Cricket Board has helped provide some diversions, a popular past-time from back home is also playing its part.

“There’s always dominoes – as you can imagine if you’ve been to the Caribbean that is a highly explosive form of entertainment, especially when you’re playing Six Love.

“We’ve been playing games in a games room, we have a golf simulation centre, we have cards, a few things the guys are enjoying. We have some characters, including the captain Jason Holder, who keeps everything lively.”

Cricket fans in England have been given their own fix of home entertainment in the build-up to the sport’s long awaited return, with the BBC replaying classic encounters against the great Windies side of the 1980s on television and radio.

Many of the current generation have spoken about the need to make their own way in the game, unburdened by the towering achievements of the past, but Simmons is keen for them to reconnect on some level with what came before.

The 57-year-old, who played 26 Tests and 143 ODIs between 1988 and 1997, said: “I’m not too sure how close some of the younger players are (to the past) but we’re trying to bring that back, get younger guys to understand where we’ve come from in terms of being top of the world for such a long time,” he said.

“Last week I saw the Lord’s Test (from 1984) where Gordon Greenidge scored a double century on the last day. Sometimes when you know the whole West Indies saga is coming from it gives you more impetus to be pushing forward to get the team back on top.

“It’s something we are trying to do back home as much as possible.”