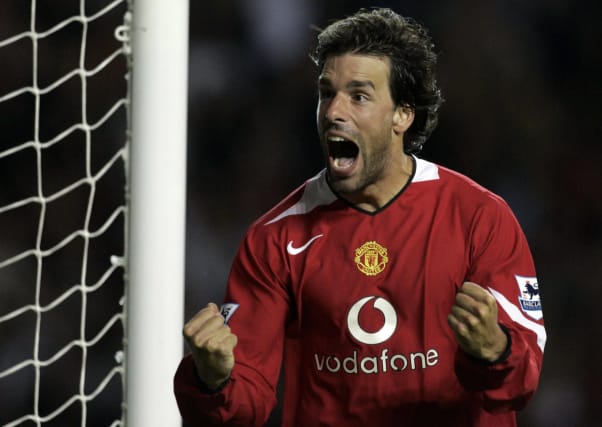 After making his long-awaited move to Manchester United from PSV Eindhoven in 2001 – a transfer delayed by 12 months by a knee ligament injury – the Dutchman showed why Sir Alex Ferguson had been so keen to bring him to Manchester, and why he stuck with him despite the injury concerns.

Though his debut in the Charity Shield ended in a 2-1 loss to Liverpool, Van Nistelrooy got his name on the scoresheet at Wembley and it would soon become a familiar sight.

He scored twice on his Premier League debut – a 3-2 win over Fulham at Old Trafford, and bagged his first hat-trick in a 6-1 win over Southampton in December.

One of his best moments came in the third round of the FA Cup third round.

He started United’s tie against Aston Villa on the bench due to concerns over a groin strain, but with his side trailing 2-0 he replaced Luke Chadwick and scored two fine goals in the space of three minutes to spark a turnaround as United came out 3-2 winners.

The goals were flowing in Europe too as Van Nistelrooy scored 10 in 14 Champions League appearances, contributing to a first-season tally of 36 in 49 games for United, 23 of them coming in the Premier League.

Though United could only manage third place in the table, 10 points behind champions Arsenal, Van Nistelrooy’s impact was acknowledged as he beat Gunners duo Thierry Henry and Robert Pires to take the PFA Player of the Year award.

It was just the start for Van Nistelrooy, who improved his goal tally the following year to help United claim the title, though perhaps surprisingly it would be the only league crown Van Nistelrooy would win during his five seasons at Old Trafford.

In the summer of 2006, having scored 150 goals in 219 appearances, Van Nistelrooy left United for Real Madrid in a 14million euro deal.