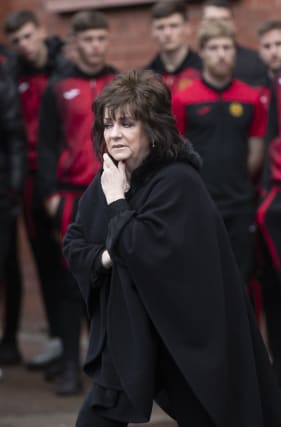 Partick Thistle have pleaded with their fellow Scottish Professional Football League clubs to do “the right thing” and vote through league reconstruction proposals.

SPFL chief executive Neil Doncaster has asked clubs to indicate by 10am on Monday whether they would back a permanent 14-10-10-10 structure next season in a bid to stop Hearts, Thistle and Stranraer being relegated.

The 2019-20 campaign was ended last month and an average of points per game was used to determine the final table, with Thistle seemingly demoted from the Scottish Championship after finishing bottom of the pile.

“Our plea is simple: choose to do no harm,” chairman Jacqui Low said in a statement on behalf of the board. “Use this opportunity to do something positive for our game – right the wrongs done to us and a number of other clubs.

“We all want to protect our own club; Thistle is no different. But there’s a difference between that and self-interest, which seeks to protect a perceived advantage created by an unforeseen crisis.

“Don’t use your vote to settle old scores. Don’t reinforce rivalries between clubs just to keep fans happy. Don’t turn a blind eye because it doesn’t impact on you – this time.

“Recognise there will be far-reaching consequences of your actions for Thistle and everyone associated with the club. If that doesn’t matter to you, then focus on doing the right thing for Scottish football.

“If this vote collapses because people cannot set aside self-interest and ego, our game potentially faces irreparable damage and ongoing division for many years to come.”

Partick Thistle had a game in hand on second bottom Queen of the South before the season was halted, which if they had won would have seen the Jags move off the bottom of the table.

While the Premiership is targeting beginning next season on August 1 behind closed doors and the Championship sometime in October, there is no indication of when the tiers below that can start.

Low added: “If there is no change to the current set-up, Partick Thistle will be the Scottish club hardest hit in professional football as the new season starts.

“Despite being relegated in an arbitrary fashion – with a game in hand and only two points behind our nearest rivals – we stand ready, willing and able to play, including behind closed doors.

“But today, we still don’t know when or even if we will play football next season.

“Does anyone in Scottish football believe we deserve to be punished with a double whammy like this? Which club would find it acceptable if they were in our shoes? Not one of them.”