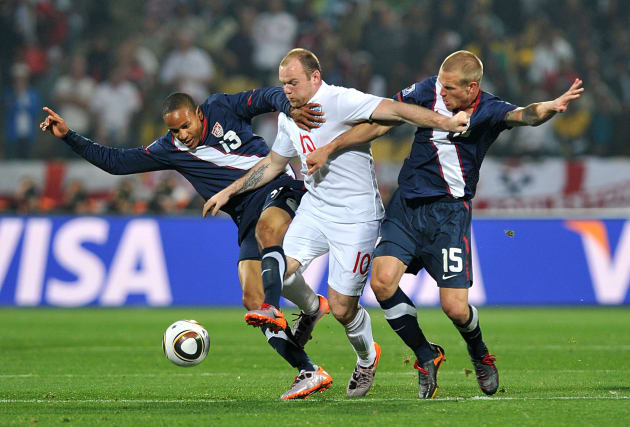 After Steve McClaren’s failure to guide England to Euro 2008, Italian coach Fabio Capello led the Three Lions to a first tournament in four years in style.

Topping Group 6 with 27 points from a possible 30 and a goal difference of 28, things were looking up as the team prepared to make their way to South Africa.

That optimism took a hit as they drew their first match in Rustenburg, where Steve Gerrard’s early goal was cancelled out by Fulham forward Clint Dempsey.

Dempsey’s shot had been a harmless one but was botched by goalkeeper Rob Green, who had only been told he would take the number one shirt ahead of David James at the eleventh hour.

It was one of a series of curious calls made by the experienced Capello, including the surprising composition of his squad and the highly controversial ‘Capello Index’ rating system.

Rooney (pictured above) was one of the star players who might have helped England rise above the torpor but this was another disappointing tournament for a player whose best performance on the big international stage came back in 2004.

It was Rooney who was captured on camera criticising the fans after a tepid goalless draw against Algeria and he was unable to prevent the 4-1 thrashing by Germany which sent the side home with tails between legs in the last 16.