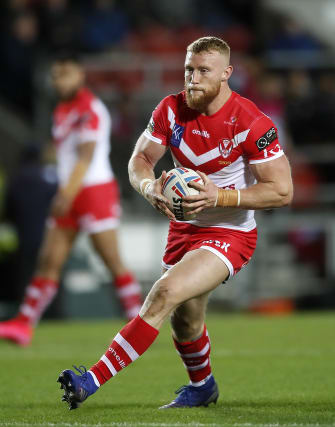 Luke Thompson will leave St Helens for NRL side the Canterbury Bulldogs with immediate effect after the north-west side said he had opted not to be part of a wage reduction programme for the 2020 season.

The 25-year-old prop had been due to move Down Under for the 2021 season but the transfer has been brought forward.

St Helens chairman Eamonn McManus said: “St Helens had been placed in a difficult position as Luke Thompson had opted not to participate in our club wide squad and staff pay reduction arrangement for the 2020 season, this being necessitated by the coronavirus pandemic and its significant commercial consequences.

“It was therefore agreed to be in everyone’s best interests for the transfer to take place now rather than at the end of the season as originally planned.”

Thompson has been with Saints since the age of 11, and featured for Great Britain on a tour of the southern hemisphere last year.

He won the Harry Sunderland man-of-the-match award in the 2019 Super League Grand Final, where Saints beat Salford, and was voted into the competition’s Dream Team line-up.

Thompson told his new club’s website: “Getting the chance to join the Bulldogs and be a part of a club with so much history and with such passionate fans is very exciting.

“Having spoken to many people at the club and listened to their plans for the future, I know that they are building for success and I’m looking forward to being part of that.”

Stuart Broad ‘frustrated, angry and gutted’ after being left out of England side