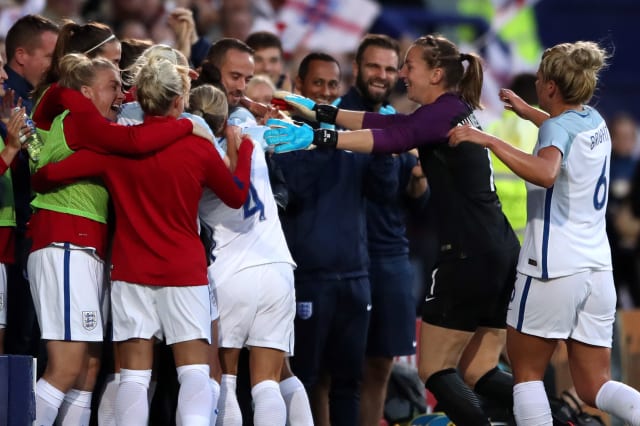 England forward Nikita Parris has apologized to her former team mate Eniola Aluko for her show of support to ex-England boss Mark Sampson in 2017.

Parris scored the opening goal in a 6-0 win against Russia in September 2017 and celebrated with Sampson, who had been accused of discrimination and bullying by Aluko and team mate Drew Spence.

Sampson was sacked by the English FA a day later as a consequence of "inappropriate and unacceptable behavior" in a previous position but was cleared of the allegations leveled at him by Aluko and Spence.

"Eni, I am sorry that my thoughtless actions caused you hurt, never is it in my conscious intentions to make another human feel devalued," Parris, 26, wrote on Twitter.

"At the time I focused more on what I believed was showing unity when really it did nothing of the sort."

Parris, who like Aluko is black, said she had been reflecting on how she could help make a change in the current climate.

Her comments come amid worldwide protests against racial injustice following the death of George Floyd, an unarmed black man who died in police custody in Minneapolis on May 25.

"I am a proud black woman, I understand I have a social responsibility to help create change through my platform," Parris added.

The FA issued a public apology to Aluko and Spence in October 2017 while Sampson followed suit in January 2019.