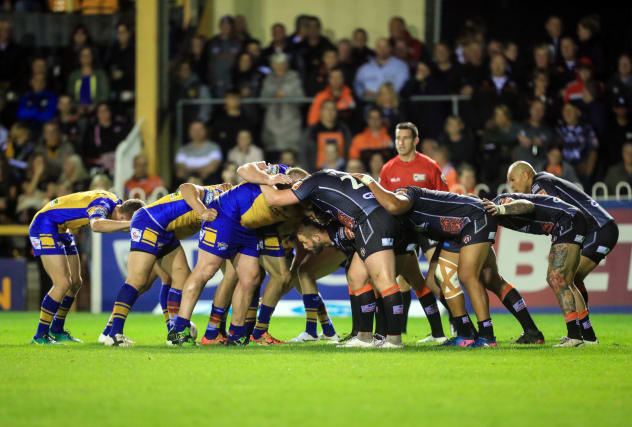 Rugby league clubs have been asked to consider the removal of scrums when the 2020 season resumes after the coronavirus pandemic, while two 2023 Cricket World Cup qualifying tournaments have been postponed.

The Rugby Football League Laws Committee has proposed removing scrums as medical experts believe players would be at far less risk of contracting or spreading Covid-19 without the set-piece for the remainder of the campaign, subject to further guidance from Public Health England.

It is one of a number of rule changes that will be considered by Super League, Championship and League 1 clubs ahead of possible implementation at the RFL board meeting next month.

The RFL is hoping to restart the season in mid-August and run through until November or December.

Other changes mirror those adopted in the NRL, including the restart of the tackle count instead of a penalty after a ruck infringement, while teams will not be penalised for late changes to squads, with the strong possibility of midweek fixtures when the season resumes.

RFL chief executive and chair of the Laws Committee Ralph Rimmer said: “These are major recommendations, but these are unprecedented times, presenting the game with unique challenges.

“The Committee recognised the importance of consulting widely within the game before the recommendations are put to the RFL Board, and that process has already started. But we believe Rugby League is well-served by its agility, in terms of being able to consider and implement such significant changes.

“The recommendation to adopt a number of the rule changes that have been introduced in the NRL in 2020 will also assist in the important process of aligning the rules across both hemispheres.”

Two qualifying tournaments for the 2023 Cricket World Cup have been postponed due to the ongoing crisis, the International Cricket Council has confirmed.

The Men’s Cricket World Cup League 2 series nine and the second edition of the World Cup Challenge League B have been called off.

The League 2 competition was set to be held in Scotland between July 4-11, with the hosts, Nepal and Namibia facing off in six one-day internationals.

The League B event was due to be staged in Uganda in August, with 15 matches between the hosts, Bermuda, Hong Kong, Italy, Jersey and Kenya planned.

ICC’s head of events Chris Tetley said: “With ongoing international travel restrictions and global health concerns still in place and on government and public health authority advice in relation to COVID-19 we have decided in partnership with Members, to postpone two further qualifying series which form part of the pathway to the Men’s Cricket World Cup in 2023.

“Series nine of the Men’s CWC League 2 which was to be hosted in Scotland and the second series of Challenge League B due to take place in Uganda have both been impacted. We will now work with hosts and Members to find a window where they can be safely and practically rescheduled.

“The ICC’s priority continues to be to protect the well-being of players, coaches, officials, fans and the whole cricket community.”