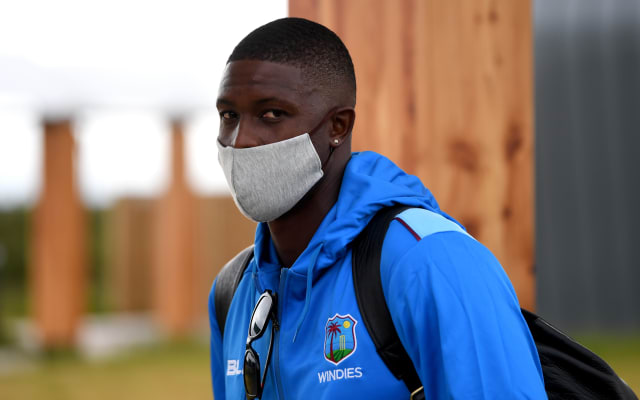 West Indies captain Jason Holder says his team will consider taking the knee during next month’s Test series against England, an act of solidarity with the Black Lives Matter movement that is also being reviewed by Olympic organisers.

Holder’s squad arrived in Manchester this week to find the country gripped by the anti-racism protests which have spread across the globe in response to the killing of George Floyd in the United States.

The act of kneeling has become a symbolic way to show support, popularised by American football player Colin Kaepernick, and many sports people are expected to do so as competitions emerge from the coronavirus shutdown.

The International Olympic Committee plans to consult with athletes about whether the gesture – previously banned from podiums – should be approved when the delayed Games go ahead next year in Tokyo.

The West Indies have a more immediate choice to make, with their first Test against England taking place at the Ageas Bowl from July 8, and Holder plans to canvass his team-mates for a collective decision.

“What has happened recently has impacted the world and the response from people around the world has been tremendous,” he said.

“You must acknowledge it and protesting or standing up for what you believe is seen as noble and courageous and something I myself would never sit and disapprove of.

“It (taking a knee) will definitely – probably – be discussed amongst us and we’ll decide how we’ll go forward as a team with it. I just want to make sure whatever we do, if we do anything, that it is done the right way.

“Whatever point we make, if we do decide to show some sort of solidarity with it, we’ll make sure everyone is on the same page.

“But I don’t want to sit here and speak for the other members of the team without consulting them.”

Former Windies skipper Darren Sammy revealed this week that he had been the victim of a potentially offensive nickname during his time in the Indian Premier League and, while Holder has escaped similar treatment in his career, he is keenly aware of the wider societal problems.

“I haven’t had any personal experience of racial abuse in cricket. As a sport I can only dial my memory back to an incident with Moeen Ali and Jofra (Archer) also had an incident in New Zealand,” he said.

“But I would be foolish to sit here and say that racism is not prevalent. It is a crime throughout the entire world and something that will probably be an ongoing discussion way past our lifetimes.

“For me the greatest thing at the end of the day is unity. I just want equality to excel, so we can have less fighting, less killing, less adversity in society. That is the main message I would like to contribute.”

“We are very clear in our position against any kind of discrimination and racism and we appreciate the athletes supporting this principle in a dignified way and making use of their right to free speech,” he said.

“We have fully supported the initiative for the IOC Athletes Commission to have dialogue with athletes around the world to explore different ways for how Olympic athletes can express their support for the principles enshrined in the Olympic charter in a dignified way.

“We also agree with the Athletes Commission that we must always respect the Olympic spirit. This means we must make a difference between such support for the principles enshrined in the Olympic charter and potentially divisive demonstrations.”

When asked if there was such a thing as a non-divisive demonstration, Bach claimed that “non-discrimination” was in the Olympic DNA.

“You will see with Olympic solidarity and our programmes around the Olympic refugee team and support for refugees worldwide, our efforts for gender equality, and so many more actions, we are delivering day by day on this commitment to non-discrimination.”

In golf world number 16 Tony Finau took to Instagram to detail his own experience with prejudice, describing an incident with a police officer in 2014.

“To describe the feeling of injustice, unfairness at this time, and try to portray that to those that have never been treated this way…it’s an inhuman feeling and wrong on all levels,” he said.