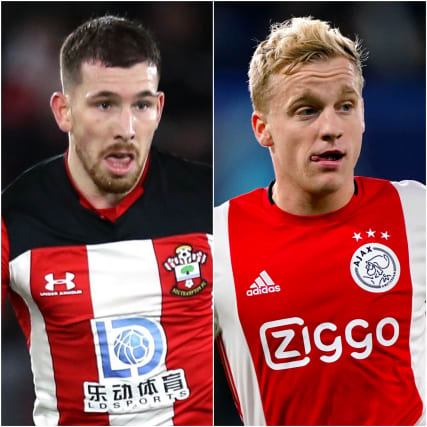 Tottenham and Everton will tussle over the signature of Southampton’s Pierre-Emile Hojbjerg, the Daily Star says. The club captain is out of contract next summer and the Saints may look to cash in before the midfielder leaves on a free transfer.

Manchester United could make a move for Donny Van De Beek, says the Sun. The Ajax and Holland midfielder has been subject of Premier League interest since breaking through into the first team in the 2016-17 season.

Chelsea are looking to double up on Bundesliga imports and are keen to make a £75m offer for Bayer Leverkusen’s Kai Havertz, says the Daily Mail. The Stamford Bridge outfit are already expected to bring in Timo Werner when the transfer window opens, with Havertz wanted to replace Willian.

Dani Ceballos would be keen on a move away from Real Madrid, according to the Independent. The 23-year-old has been on loan at Arsenal for the current campaign and has made 24 appearances for the Gunners.

Adam Lallana is set to sign a new short-term contract at Liverpool to allow him to complete the delayed Premier League season at Anfield, reports the Daily Mail. The midfielder is expected to move to Leicester over the summer, but Tottenham, Arsenal, Burnley and Bournemouth are also interested, the paper adds.

Ansu Fati: Manchester United saw a £89m bid for the Barcelona teenager rebuffed and are among a number of Premier League clubs interested in the winger, says Sport.

Marc Roca: Arsenal are leading the pack in the race to sign the 23-year-old from Espanyol, according to the Daily Express.

Max Aarons: North London rivals Arsenal and Tottenham are both keen on the Norwich right-back, says the Sun.