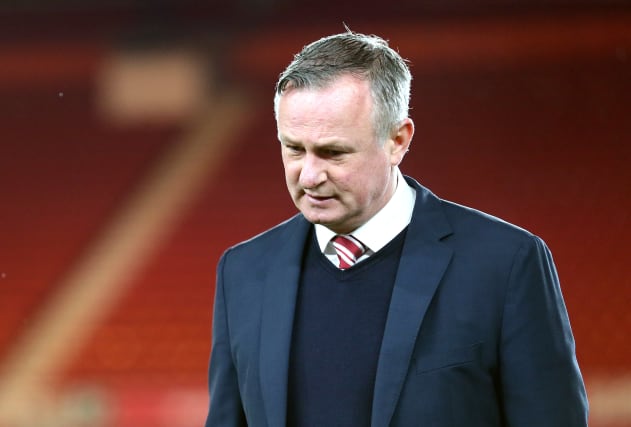 Stoke announced manager Michael O’Neill tested positive for coronavirus as League One and Two clubs chose to curtail their seasons.

The Northern Irishman’s positive test meant the Potters’ friendly at Manchester United’s training ground on Tuesday was called off at short notice.

A statement said: “Stoke City can confirm that manager Michael O’Neill has tested positive for the Covid-19 virus following the latest round of testing on Monday (June 8).

“O’Neill had tested negative in the previous five rounds of testing. He will now follow the relevant guidance and undergo a period of isolation, whilst continuing to be in regular virtual contact with his coaching staff and players.”

Coventry and Rotherham celebrated promotion to the Championship while Swindon were declared League Two champions after the English Football League’s bottom two tiers voted separately to officially declare the campaign over due to the coronavirus pandemic.

However, play-offs will still go ahead to determine the final promotion places with Wycombe, Oxford, Portsmouth and Fleetwood contesting them in League One and Cheltenham, Exeter, Colchester and Northampton vying to join Swindon, Crewe and Plymouth in gaining elevation from League Two.

Tranmere, who had proposed an alternative framework to the one chosen by the clubs, have been relegated to League Two, along with Southend and Bolton.

Relegation from League Two is still to be decided with Stevenage bottom but Macclesfield facing a potential points deduction and the National League still to confirm whether its campaign will go ahead.

EFL clubs had earlier voted to accept the league board’s framework to keep promotion, relegation and the play-offs and use an unweighted points-per-game system to decide the final table if the season was curtailed.

Barnsley and Tranmere had set out alternative plans while three other clubs had proposed amendments – but the board’s plan was ratified.

League One clubs will vote later on the fate of their campaign, with the Championship due to resume on June 20.

The International Cricket Council announced that Test teams would be allowed to substitute players displaying Covid-19 symptoms. Players will no longer be allowed to use saliva to shine a ball and the need for neutral umpires will temporarily be removed.

England and West Indies are due to start Test cricket’s return on July 8 and the tourists arrived at Manchester Airport on Tuesday morning.

Every member of the 39-strong touring party, including 25 players, tested negative for Covid-19 before they set off on a charter flight and were due to be tested again at their ‘bio-secure’ living and training quarters at Emirates Old Trafford, where two of the three Tests will be held.

Pakistan have given a strong indication that they will follow West Indies by finalising their coaching staff for their tour of England, which had been due to kick off on July 30 but will need to be rearranged.

France’s highest court has suspended the relegation of Amiens and Toulouse from Ligue 1 but rejected an appeal lodged by Lyon that could have seen the season restarted.

The key decision could see France’s top flight expanded to 22 teams next season, with the court ordering the Ligue de Football Professionel to reconsider its structure for 2020-21.

The legal cases stemmed from the LFP’s decision in April to terminate the season with 10 games left to play after the French government had said professional sport could not return before September.

The Wales Rally GB, the penultimate leg of the World Rally Championship season, has been cancelled.

The race was set to run from October 29 to November 1 but the ongoing uncertainty and concerns surrounding safety and travel restrictions forced the event to be called off.

David Richards, chairman of Motorsport UK, said: “We have been closely monitoring the guidance issued by Government and it is becoming increasingly clear that it is impossible to make plans with any certainty for such major events in the autumn.”

The Evian Championship – the Ladies’ Professional Golf Association’s first major championship of the season – has also been shelved.

The tournament was scheduled to take place between August 6-9 at the Evian Resort Golf Club in France but organisers admitted defeat after being unable to ensure safety protocols could be carried out for players arriving from around the world.

The golfing calendar – both men’s and women’s – has been decimated by the global health crisis, although the Charles Schwab Challenge in Texas is set to take place this week behind closed doors on the PGA Tour.