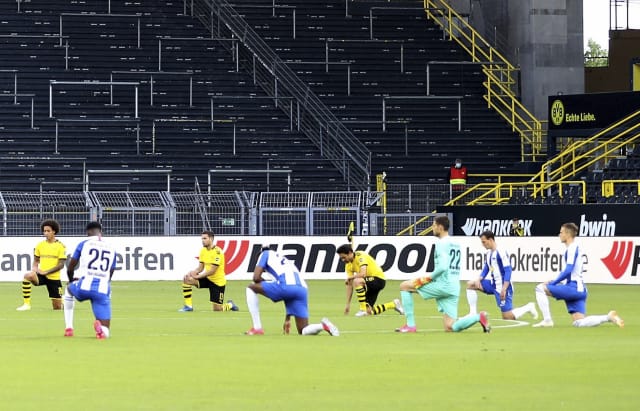 Kick It Out chair Sanjay Bhandari has urged the football authorities to back players in staging an organised gesture of solidarity with the anti-racism demonstrations sweeping the world.

Bhandari said he has been heartened by the response of FIFA and the German Football Association in ruling out taking action against the likes of Jadon Sancho, who showed his support for the movement during the resumption of the Bundesliga.

And while Bhandari stressed that any mass mobilisation must come from the players themselves, he is determined that the unique opportunity to boost the anti-racism message is not lost on the game.

Bhandari told the PA news agency: “I think it’s at the point now where something should be organised – I would love to see every club doing something together but it has to be completely up to the players.

“It would be a fantastic signal if every club took a knee before a game. You can’t shake hands before kick off, so maybe they could replace it with a new pre-match ritual.

“We’re having some conversations to see what the appetite is. I think it would be a strong gesture of solidarity if everybody took a knee, but it would be an even stronger symbol if it came from the players.”

The FA has indicated it will take a “common sense” approach to such protests while PA understands that the Premier League will also turn a blind eye to players taking a knee during matches.

Bhandari said that while the response from the authorities provided cause for optimism, he stressed that it is imperative that mere gestures in the direction of anti-racism are now transformed into something more tangible.

“It is a small but significant step and I certainly value and appreciate that FIFA and UEFA and the FA have got it right in their response, judging by the tone and the public mood,” he said.

“All these gestures are important but our challenge now is to go beyond these gestures and confront these structural inequalities, not just in football but in society, politics and business.

“For those people who are influencers, who have provided these gestures of solidarity, I’ve got one request – you need to stay involved.