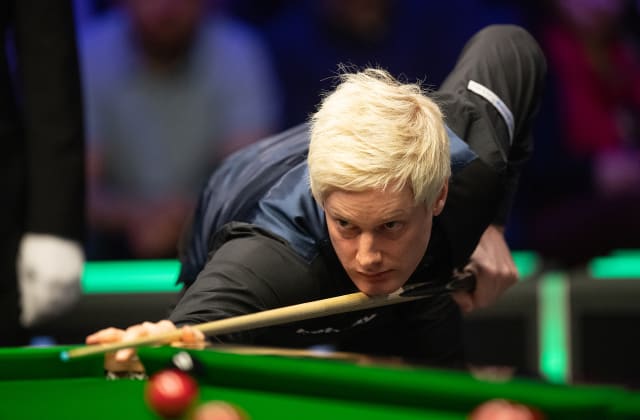 Neil Robertson expressed his relief at finally being able to return to a competitive snooker table despite his comeback ending in defeat to world number 83 Ashley Carty.

Despite firing a 119 break to pull level in the second frame, the former world champion went down 3-1 in his opening Championship League match in Milton Keynes, with two further games scheduled for Sunday.

Robertson admitted the event, which is being played behind closed doors amid strict social distancing protocols, presents motivational issues despite the long break from competition.

Robertson said: “It would be very strange to play in this format for an actual [bigger] event, so that’s where the adjustment is going to take place.

“But playing in this I am perfectly happy to experiment and adjust to how we are going to be moving forward over the next couple of months.

“Probably under normal circumstances one month into the season I would have won the first three frames pretty comfortably. There’s a little bit of rustiness but it’s just about getting used to the feeling of how it is.”

Robertson, who has been an outspoken advocate of mental health issues in recent years, said he had not been inclined to follow the example of Alfie Burden, who took a knee in solidarity with the Black Lives Matter movement before his own appearance in the tournament last week.

Robertson added: “I fully support Alfie and the anti-racism protesters but I think people need to have a look at the full picture and really understand what they are doing.

“People need to make sure they are not doing it just because they haven’t been out of the house for three months.

“It hasn’t been a great week outside of sport, there’s a lot going on in the world so in some ways it was nice to get out there and play a little bit of snooker.”