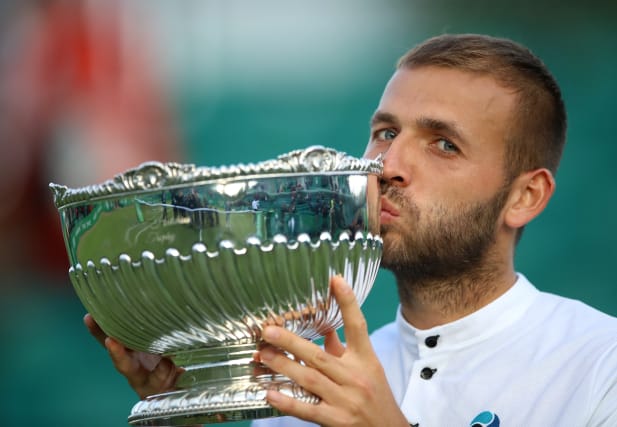 British number one Dan Evans has admitted he hated himself during his 12-month drugs ban.

Evans’ career hit a nadir in 2017 when he was suspended for a year after testing positive for cocaine.

He has turned things around since his return to the game and currently sits at a career-high 28 in the rankings – which have been frozen due to the coronavirus pandemic.

The 30-year-old has sought the help of a sports psychologist, who described the tennis player as “one of the angriest people” he had ever spoken to.

“You still reflect on it some days, and think, ‘That was stupid’,” Evans said about his failed drugs test on the My Sporting Mind podcast. “But I don’t look back and hate myself like I did during the ban.

“During some parts of the ban, you’re disgusted with what you did, but you have to move on at some point, there has to be a line under the end of what you’ve done. I just feel grateful for when I get out on the court.

“When I first sat down with the sports psychologist he said I was probably one of the angriest people he had ever spoken to.

“After I came back, he said I had so much pent-up anger from the ban and how I was speaking about things.

“It was just that I had been banned: there is gonna be anger towards yourself and your actions.

“I left social media when it happened. I was worried what my peers would think, and the people watching. But that went away quick. All the players were really good. No one ever said anything to me in a bad way.”

Evans found difficulty on his return to the tour as the All England Lawn and Tennis Club did not give him a wild card into Wimbledon, which saw him have to enter a pre-qualifying event played on school courts.

That fuelled some of the anger that Evans built up.

“Coming back, I had a few issues with trying to get back to play and getting into tournaments, and I wasn’t getting the easiest of help from the people I had helped before,” he added.

“I had played for my country a lot, and they were not so forthcoming with helping me get back into tournaments.

“That’s where the anger came from. It was difficult. But we all sat down and got it out of the way. Luckily I got back on court and that was that.”

Evans has grasped his second chance on tour, assuming the British number one ranking and breaking into the world’s top 30 for the first time.

“If you get another chance, it’s probably your best chance,” he said. “If you don’t take the first one, really go after the second.

“Luckily I have got a good chance now, and I am trying to use it to its full potential.”