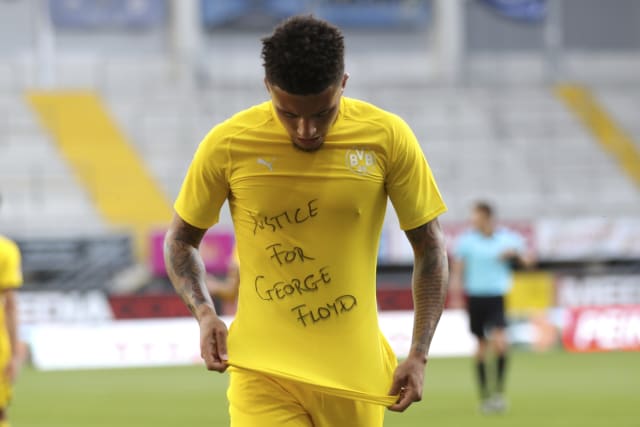 Footballers in England are unlikely to face any disciplinary action for taking the knee or other peaceful anti-discrimination protests if matches are able to resume this month.

The Football Association has said it will adopt a “common sense approach” to interpreting the laws of the game around political gestures, slogans and statements if there are any examples of players or staff supporting the #BlackLivesMatter cause.

The death of George Floyd, killed when a white police officer held him down by pressing a knee into his neck in Minneapolis last week, has provoked demonstrations and condemnation in the United States and the wider world.

Sports stars, clubs and governing bodies have shown solidarity with the cause and the FA has indicated its understanding of individuals wanting to protest.

“The FA strongly condemns discrimination of any kind and has endeavoured to ensure that football in England is both diverse and inclusive in recent years,” a statement from the governing body read.

“Where any behaviours or gestures on the pitch that may constitute a breach of the Laws of the Game have to be assessed, they would be reviewed on a case by case basis with a common sense approach and understanding of their context.

“The power of football can break down barriers across communities and we remain deeply committed to removing all forms of discrimination from across the game we all love.”

Under Law 4 Section 5, players are not supposed to have slogans, statements or images on their kit or other equipment which could be deemed as political.

The laws state that a match official should ask the player to leave the field and remove the item before returning to the field.

It is understood that taking the knee in the manner in which Borussia Monchengladbach forward Marcus Thuram did would be unlikely to attract any sort of sanction. Taking the knee in a way which could be viewed as provocative, perhaps doing so deliberately in front of someone who has previously been charged with or found guilty of a racism-related offence, may warrant further action.

England and Borussia Dortmund forward Jadon Sancho lifted his match shirt to reveal a ‘Justice For George Floyd’ message on a T-shirt underneath, and similarly such an incident in this country would be unlikely to prompt any action.

Human rights group Amnesty International says it would “applaud” any athlete making a gesture of solidarity on this matter, including opting against competing in the US.

Its UK director Kate Allen said: “Numerous British sporting figures already speak out about racism and other human rights issues here in the UK, so it’s likely some will be moved to say something about the appalling scenes in the USA.

“As we saw with Liverpool football players this week, taking a knee is just one of the many things sporting figures can do if they want to express their anger at US police violence against people of colour.

“Whether UK athletes go to the United States – or anywhere else – will always be a matter for them, but from black power salutes in the sixties through to Colin Kaepernick’s famous gesture in 2016, sporting stars have shown they can make important human rights interventions.”

The Commonwealth Games Federation wrote an open letter to sport, saying that what was happening in the US needed to be “a wake-up call” to athletes and administrators.

A letter signed by CGF president Louise Martin and chief executive David Grevemberg read: “Right now, we are faced with managing the impact of a global pandemic and the pain, anger and sadness resulting from the tragic and brutal killing of George Floyd. Both raise the familiar spectres of inequality, racism and injustice into our hearts and homes and our wider communities.

“The world of sport cannot be an observer. A Games, a match, a season does not happen in a vacuum. Silence or the status quo cannot be an option.

“It is our passionate belief that athlete advocacy and activism humanises, rather than politicises, sport.

“We must use our voices and continually seek to reduce inequalities and build peaceful communities.”

The chair of anti-discrimination group Kick It Out, Sanjay Bhandari, said Premier League players taking the knee as a mark of protest would be “a powerful image”.

Chelsea and Newcastle players were among those who took the knee during training sessions on Tuesday.

Newcastle player DeAndre Yedlin, a US international, posted a series of tweets on the situation in his home country.

“Every American needs to ask themselves, is there ‘liberty and justice for all’ and if their answer is yes, then they are part of the problem. In no way are we asking black lives to matter more than white lives,” he wrote.

“All we’re asking is we are seen as equal, as more than 3/5 of a man, as humans. My heart goes out in solidarity to George Floyd, his family, and all of the countless number of victims that have had their lives taken at the hands of meaningless police brutality.”