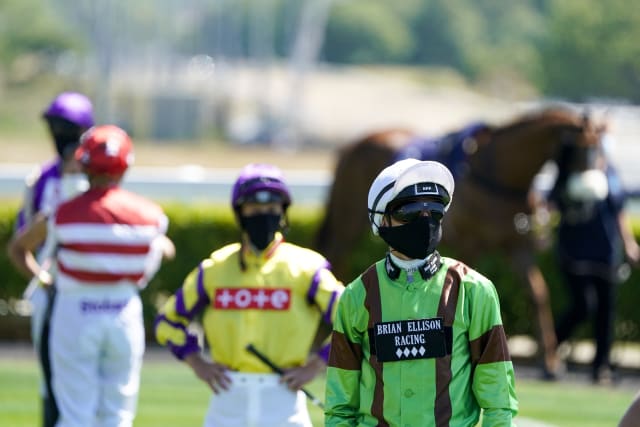 Zodiakos wrote his name into the record books with victory in the first race in Britain following the coronavirus shutdown, but the pandemic is still affecting other sports.

After Government approval was granted on Saturday, racing was the first major professional sport to resume in Britain with its first meeting since March 17.

And Zodiakos claimed a piece of history by finishing first in the Betway Welcome Back British Racing Handicap at Newcastle.

At the head of affairs right from the off, the Roger Fell-trained gelding bowled along in the mile contest under his jockey James Sullivan, who like all riders was wearing a face mask as part of the strict hygiene protocols in place.

His better-fancied stablemate Al Ozzdi came there strongly two furlongs out in the hands of Ben Curtis, but while he took a definite advantage at one stage, the 22-1 winner fought back gallantly and was a neck to the good at the line.

Racing got under way with the first event at 10.21am, with 6/1 shot Im Sophie winning from Peachstreet Jack and Dungarvan Hobo.

The Rugby Football League and the Australian Rugby League Commission jointly announced the cancellation of the three-Test England-Australia Ashes series on Monday morning, as both bodies focus on completing their domestic club competitions.

The Tests had been due to take place in England in October and November, with the competition being revived after a 17-year absence. Talks have already begun about a series in 2022, with the World Cup taking place next year.

“However the current circumstances have had a seismic impact on rugby league, as on all other sports, and we all now need to give, in order to find solutions for the greater and longer term good of the game.

“After regular discussions with the ARLC over the last few months, combined with those within our domestic competitions, we have concluded that the right thing to do for the game as a whole is to make this decision now.”

And manager Mark Warburton is equally scathing saying he is “staggered” by the lack of consultation ahead of the date being revealed.

The Premier League announced last Thursday play is due to return on June 17 following the coronavirus suspension that began in mid-March.

The EFL followed suit on Sunday evening when announcing that the Championship is set to restart around the same time – news that shocked and angered QPR.

“I am absolutely stunned by this announcement, as is our director of football Les Ferdinand and our manager Mark Warburton,” chief executive Hoos said.

“Incredibly, there has been absolutely no consultation with individual clubs nor with the Championship doctors’ working group by the divisional representatives – or anyone else in the Football League – regarding this matter.

“On top of that, we were only made aware of the statement 40 minutes before it was made public.

“Having spoken with Les and Mark, they share my views. We are vehemently opposed to this schedule.

“The players haven’t even returned to full-contact training at this moment and yet they are now expected to be in a position to play at a competitive level in just three weeks’ time.

“I have made our feelings known to the EFL and, having spoken with a number of CEOs at other Championship clubs, I am not a lone voice on this matter.

“We are absolutely appalled.”

The British Basketball League has announced that the remainder of the 2019-20 season has been cancelled.

The BBL said in a statement that clubs had “unanimously agreed” to the cancellation.

BBL chairman Sir Rodney Walker said: “We looked at every option, including playing behind closed doors or restarting the season in the summer, in order that we could get to a League and play-off winners, but with the continued uncertainty, we just ran out of time and options.