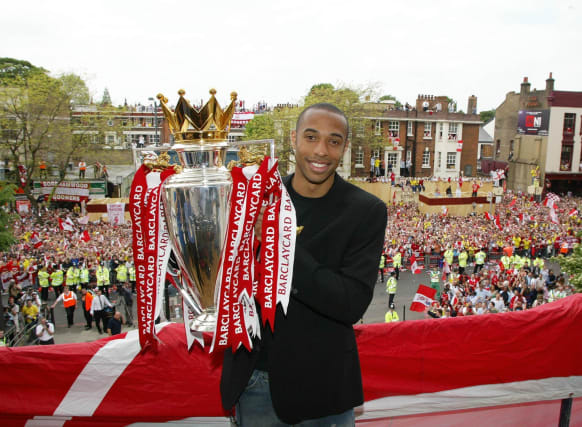 Thierry Henry took time to settle in the Premier League but once he did there was no stopping him.

Already a World Cup winner, he failed to score in his first eight games for the club but after his first strike in the 1-0 win over Southampton in September 1999 he never looked back, ending the season with 26 goals.

Henry, who also claimed Euro 2000 with France, won the 2002 Premier League with Arsenal but collected his first Player of the Year award in 2003, having helped Arsenal win the FA Cup and finish second in the Premier League, scoring 32 goals in all competitions.

A year later he was part of the Invincibles who won the title without losing a game, this time scoring 39 goals and being the top flight’s leading marksman with 30.

His form saw him crowned Player of the Year again and he helped the Gunners to the 2005 FA Cup.

Later that year, Henry became Arsenal’s record scorer with two goals against Sparta Prague in the Champions League, surpassing Ian Wright’s 185, but the Gunners lost the 2006 final to Barcelona in Paris.

After an injury-hit final season in north London, Henry joined Barca in 2007, winning two LaLiga titles and the Champions League.

He joined New York Red Bulls in 2010 where he finished his playing career in 2014 – but not before a brief loan return to Arsenal in 2012, scoring twice in six substitute appearances.

Henry now manages Montreal Impact in the MLS after an unsuccessful spell as Monaco boss in 2018-19.