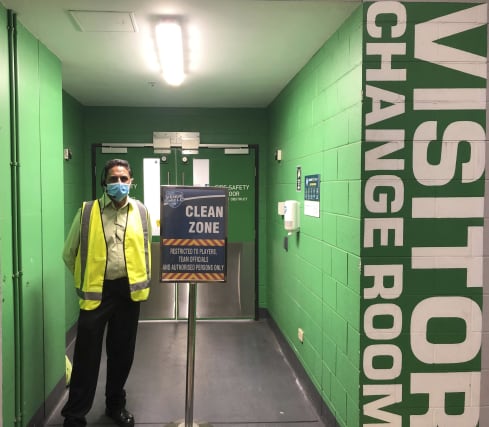 Parramatta Eels triumphed 34-6 over Brisbane Broncos as NRL’s return brought professional sport back to Australian soil, but the occasion began with a failed temperature test for Brodie Croft.

Host broadcaster Fox Sports reported the Broncos half-back twice recorded temperatures over the allowed limited on arrival at Suncorp Stadium before passing clear at the third time of asking.

Speaking ahead of the match, Croft told Fox Sports: “I’m feeling good now, I’m keen to get out there. The excitement got to me a bit there when I was at the front gates.”

The 22-year-old went on to score a fine solo try but it was in a losing cause as the Eels proved too strong.

Sixty-seven days after the second round of fixtures, the competition resumed behind closed doors with crowd noise piped in and a smattering of cardboard cut outs in the stands.

After a minute’s silence for the late Arthur Summons, the Eels got going with a try from Marata Niukore in just three minutes – coming after solo referee Gerard Sutton used the new ‘six again’ rule in the away team’s favour.

Croft levelled things with a brilliant effort but that was as good as it got for the Broncos, whose captain Alex Glenn was sent to hospital for stitches on a gash in his leg.

The Eels ran riot in the second half, underlining their status as potential title contenders.