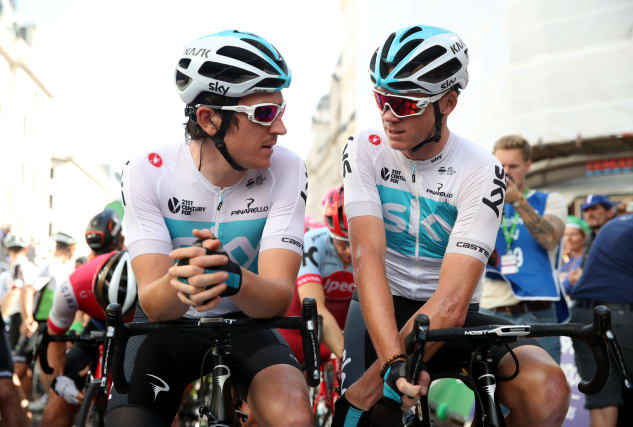 Chris Froome, Geraint Thomas and Egan Bernal have all been told they should prepare to lead Team Ineos if this year’s Tour de France goes ahead.

Leadership issues have once again come to the fore in the team as the three former Tour winners vie for supremacy.

Froome, 35, is desperate for a shot at a record-equalling fifth title following his long comeback from injury, while defending champion Bernal, by far the youngest of the three at 23, has said he does not want to sacrifice himself for others.

The 34-year-old Thomas, winner of the 2018 edition, has also made the Tour his priority.

The situation even led to reports that Froome, out of contract this winter, could look to make a rare mid-season move away from the team ahead of the Tour in order to secure leadership elsewhere, though that is seen as highly unlikely.

No promises have been made to any of the riders, with Ineos keen for them all to arrive in their best shape at the race, which is now scheduled to begin on August 29, two months later than originally planned.

“In a team with three previous winners of the Tour, all have shown they are capable of leading the team and all are encouraged to prepare to do so,” a team statement said.

“We know a lot changes in our sport and a final decision on roles will be made closer to the time when more information is available about each rider’s form, fitness and which best fits the overall team strategy.

“Given the strength of this year’s opposition we know that it is the collective strength, unity and experience of our team which will optimise our chances of winning.”

Froome spoke on Italian television on Wednesday night, saying the important thing was that the team succeeded.

“I am ready for the Tour, and also to be a leader,” Froome said in Italian on Sky Sports Italia. “The important thing is that, at the end of the day, the team wins. That’s the thing that matters. Then the road will decide the rest.

“Three leaders? I don’t know how we will manage it… Joking, we will find the solution and respect our goals. Everyone will want to win, but it’s the team that counts.”