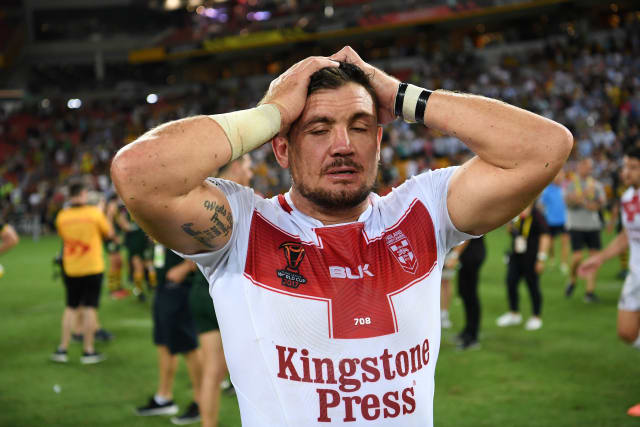 Rugby Football League chief executive Ralph Rimmer has admitted it will be tough for England’s Ashes series against Australia to go ahead.

England were due to play three Tests against the Kangaroos in October and November but Rimmer acknowledges that the series may have to be sacrificed.

The NRL season resumes in Australia on Thursday with Brisbane Broncos facing Parramatta Eels and the Grand Final is not scheduled to take place until October 25 at the earliest.

Asked if the Ashes could go ahead as scheduled, Rimmer told Sky Sports: “If I’m being honest it will be tough.

“We are speaking to the NRL on a regular basis but I think we all accept that in very difficult times some sacrifices have to be made.

“Hopefully I’ll have something to announce in the very near future. We have to be realistic and it is under some threat.”

Meanwhile RFL chief executive Robert Elstone said Super League clubs were due to meet on Thursday to discuss options for resuming the Super League season, which has been suspended since March 15 due to the coronavirus pandemic.

Clubs have drawn up plans for a possible return to action by mid-August and three models have been put forward for consideration by the RFL board of directors which would see the season end in a Grand Final on either November 28, December 12 or mid-January in 2021.

“The situation is very fluid,” said Elstone. “We want and need to start playing again soon. We need to get going again.

“In the fixture list we have prepared we have tried to backdate our schedule to play as many fixtures as possible towards the end of the season.

“We need to work through testing and see how the virus goes over the next few weeks and make our decision. We have built some time into our schedule to get our testing right.

“There is a meeting of clubs tomorrow to reflect on the options.”

The Super League Grand Final is key to the game’s finances and Elstone added that Manchester United are being accommodating about the use of Old Trafford to stage it.

“The Grand Final and play-offs generate £1.5million for us and, if we are not having crowds, renting Old Trafford (for the Grand Final) would not work for us. We have to be hopeful that we could get crowds.

“We don’t know what the 2020-21 football season calendar is going to look like but we have got a great partner in Manchester United.

“They have been accommodating in what we want to do and they have said they will have dialogue with us about making sure the Grand Final remains at Old Trafford.”