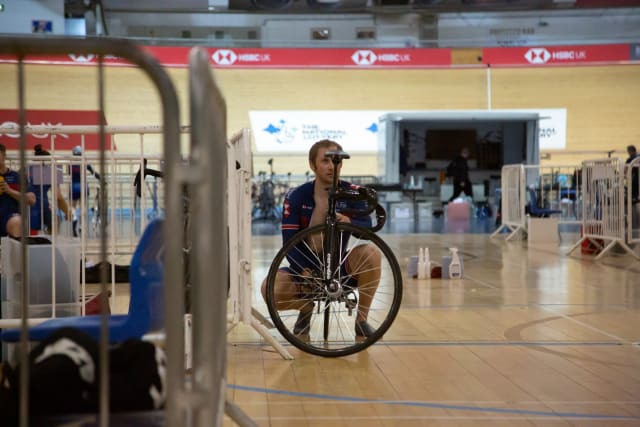 Great Britain’s Olympic hopefuls have returned to the velodrome this week for the first time in two months as restrictions imposed under the lockdown begin to ease.

Tuesday was the first day of access, with six-time Olympic champion Jason Kenny among 12 riders and 13 members of staff present for sessions on the velodrome boards and in the BMX centre, under strict rules on social distancing.

That is a long way short of a full complement, with the focus for now on those riders – primarily track sprinters and BMX riders – who need access to the track to train fully.

“This is about training they can’t do at home,” British Cycling’s performance director Stephen Park said. “Where they can train at home, they should.”

Even so, with 421 days left until the Tokyo Olympics, riders have been quick to sign up for access having being locked out of the building since March 21.

“I was joking that all the riders had completed their informed consent forms within about 30 minutes of it going live online,” Park said. “If we could get a 30-minute turnaround on most things here we’d be quite happy.

“They were all chomping at the bit to get back in and they were here bright and breezy, on time, and happy to be back at it.”

Beyond those forms, riders must undergo a temperature check and speak to the team doctor upon arrival at the National Cycling Centre, but have not been tested for coronavirus.

“We’re not testing riders here,” Park said. “(It was discussed) but the process of testing was written off fairly early. It wasn’t felt that it was required, just in terms of the medical advice we had…

“But if there was any reason for our head of medical to consider that anybody might be in need of a test I’m sure they would direct them appropriately.”

Riders will find the cycling centre is not quite as they remember it, with a huge number of measures put in place to make it as safe as possible. Park said 120 files had been produced laying out procedures for every imaginable scenario.

Riders are given individual pens in track centre, with a one-way system in place throughout the building and a large number of spaces still off limits.

“We’ve not invented the space shuttle,” Park said. “A lot of it is fairly obvious, but it’s just the challenge of doing it in a big facility for a large number of people.

“It’s the most socially distant I’ve felt in several weeks. Everybody is very conscious of it, more so than if you’re walking down the street or going to the local supermarket.

“But obviously it’s in our interest to do everything we can to keep our riders and staff as healthy as possible. If they can’t take part in training because they’re recovering from illness, it’s not just the illness but the loss of training time and that can be felt for several weeks.”

For now, riders will be restricted to training on their own, but Park said the plan was to move to the next level – including contact – within a fortnight, allowing team pursuit and Madison training sessions to take place.

“I think we could be there a lot quicker, but we’re keen to take a pragmatic, balanced approach to it all,” Park said. “We’ll keep taking small steps in the right direction.”