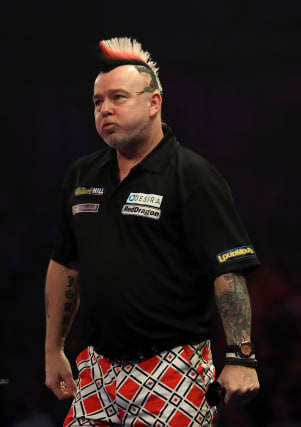 Reigning PDC World Champion Peter Wright was eliminated from the PDC Home Tour for a second time, missing out on top spot to Jelle Klaasen after being humbled by the Dutchman in the final match of the night.

Wright was given a second bite at the cherry in the group stages, having initially been knocked out in the tournament’s opening night last month, and he cashed in last week to reach the play-offs.

Despite overcoming fellow Scot Ryan Murray and prevailing in a last-leg decider against Spain’s Cristo Reyes, Wright was bundled out by Klaasen, whose 6-1 victory saw him top the round-robin standings.

The play-offs feature the 32 winners from the group stage held over the last few weeks as a means of players being able to compete from their own homes because of the coronavirus pandemic.

‘Snakebite’, who saw off Michael van Gerwen to win the PDC title in January, made a comfortable enough start as he saw off Murray 6-2 while Klaasen made a sluggish start as he lost 6-5 against Reyes.

Klaasen hit back as he recovered from 3-1 down to beat Murray 6-4. It was not vintage darts from the Dutchman but he did enough to remain in contention to reach the semi-finals.

Wright claimed the whip hand in the group but only after Reyes missed six match darts, the Scot winning the final two legs of the match to claim an unexpected 6-5 win.

However – after Reyes beat Murray 6-3 – Wright faulted at the last as Klaasen, needing a 6-3 victory or better to progress, stormed into a 5-0 lead.

Wright finally got on the board in the sixth leg and threatened to break in the next but Klaasen sealed a dominant 6-1 success.