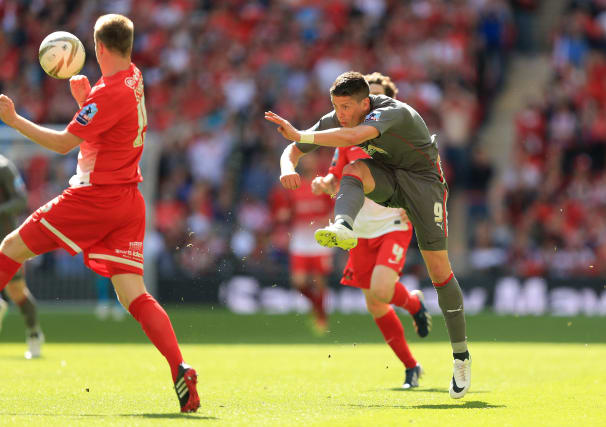 Alex Revell scored one of the best goals the new Wembley has seen and he did it when his Rotherham team needed it the most.

The Millers were struggling in the 2013-14 League One play-off final as they trailed 2-0 at half-time to Leyton Orient.

But Revell stepped up after the break to deliver two goals in the space of five minutes against his former club, the second of which will be remembered for years to come – not least for the celebration of Rotherham manager Steve Evans.

Revell used to play for Orient, who looked to have secured Championship football after Moses Odubajo and Dean Cox had put them ahead before the break.

The striker got his side back in it 10 minutes after the restart when he poked home a loose ball from a set-piece, but his second was far better.

Picking up Kieran Agard’s knockdown 50 yards out, he controlled on his thigh before sending a looping volley over Orient goalkeeper Jamie Jones and into the net. Revell went charging off to the corner flag while the portly Evans was left pulling his trousers up after he went sprinting down the touchline.

There were no more goals and the striker, who went off late on with a knock, had to listen to the resulting penalty shoot-out from the dressing room, but made his way out for the celebrations after Adam Collin saved two of Orient’s penalties to send the Millers up.

Revell left the South Yorkshire club midway through the next season to join Cardiff and is currently the manager of League Two Stevenage.