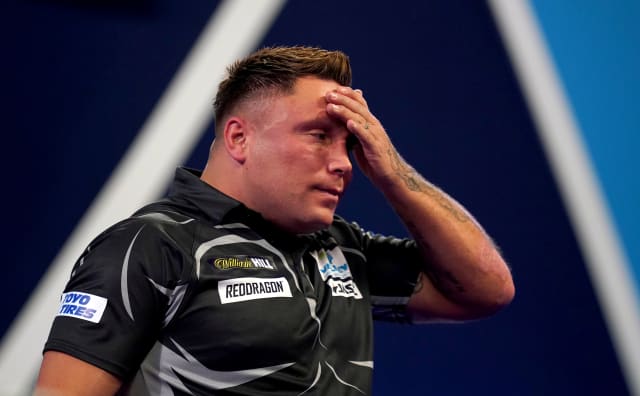 Gerwyn Price’s second attempt at qualifying for the last 32 of the PDC Home Tour ended in disappointment as Joe Cullen topped Group 31 with an overall average of 106.65.

The world number three admitted he had spent most of lockdown away from the oche, carrying out DIY on his house and gardening.

It initially showed as the Welshman, who failed to qualify for the next stage on night two, slipped two legs behind in his opening match to Bradley Brooks before winning 5-3 with two ton-plus checkouts.

But he came unstuck against a rampant Cullen, who followed up an opening 5-2 win over Keegan Brown by outclassing Price 5-3 in a high-quality match which included seven maximums.

Price said: “I played alright in a couple of my games, but it wasn’t enough in the end. It is not a PDC Tour I like to play in. It is a bit of fun, but I am giving my best, my all.”

Cullen then secured progression by whitewashing winless Brooks with five 180s, leaving Price and Brown to battle it out for second spot in the last match of the evening.

Cullen said: “If I am honest, since I played on the sixth, I have had little practice. It is difficult to motivate yourself when you’re not playing regularly. I am a steady away practiser, but I keep myself for games.

“Tonight it has worked out like that. I just need to improve my mindset.”

NHS worker Brown just about stayed awake for his clash with Price, having dragged himself out of bed following a night shift.

Having produced a 170 checkout in defeat to Cullen and hammered Brooks 5-1 with a 101 average, Brown ended the night by coming back from 2-0 down to beat Price in a last-leg decider.

Brown said: “It is hard to get motivated for the last game with nothing on it, but it was nice to get a win. Darts is not my number-one priority at the moment, the hospital is.”