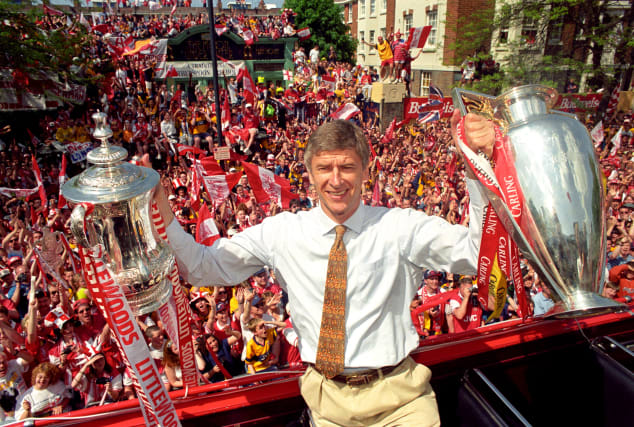 Arsene Wenger wrote himself into Arsenal folklore in his first full season at Highbury.

In February 1998, they were nine points behind Manchester United but a run of 10 straight wins, including a crucial 1-0 victory at Old Trafford, saw them clinch the title by a point.

It was the first part of Wenger’s revolution after he officially replaced Bruce Rioch in October 1996.

A 2-0 win over Newcastle at Wembley in May, thanks to goals from Marc Overmars and Nicolas Anelka, then sealed their first double since 1971.

But the Gunners would lose out to Manchester United in their quest to retain both trophies a year later.

Ryan Giggs’ memorable solo goal knocked them out in the FA Cup semi-final while they finished a point behind Sir Alex Ferguson’s team in the league.

It was another four years before they claimed the title again – another league and cup double after victory over Chelsea in Cardiff.

The pinnacle of Wenger’s time at the Gunners then came in 2003-04 when they won the title without losing a game, becoming known as the Invincibles.