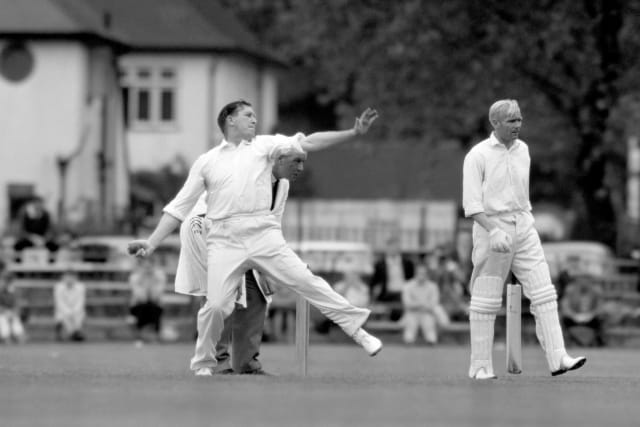 On May 16, 1956 Jim Laker completed the prized feat of claiming 10 wickets in an innings as Surrey took on the touring Australians at The Oval.

It is the kind of achievement most players would spend a career falling short of, but for Laker it was merely the pre-cursor to an even more astounding performance later that summer.

Laker was no novice in the summer of 1956, having earned 24 Test caps in the previous eight years. His progress had slowed sharply after taking seven wickets in his first innings as an England player, though, and he was not selected for the 1954/55 tour of Australia while managing just a solitary appearance against South Africa in 1955. In short, he needed a big performance to restate his case.

Laker reported to his home ground exhausted after a rough night looking after his sick daughter, but Surrey captain Stuart Surridge was insistent that the off-spinner should take the field. Any hopes of a rest in the pavilion disappeared when Australia won the toss and opted to bat. Surridge tossed Laker the ball midway through the opening session and before stumps had been pulled, he had pocketed stunning figures of 10 for 88.

When he took three wickets in two overs after tea, the crowd began to visibly swell as word of mouth passed down the news that Laker was working his magic on England’s oldest rivals. When Australia were nine down, batsman Keith Miller reportedly told Laker he would not allow him to take the full 10 and began hacking away frivolously at the other end. Dennis Cox dropped a catch that would have allowed Tony Lock to finish the innings, with some disagreement at the time about whether or not it was deliberate. In the end it was last man Jack Wilson who gave way, caught behind in debated circumstances by Roy Swetman.

The famed cricket writer EW Swanton was in attendance and had this to say of Laker’s bowling: “Nothing less describes the unfailing accuracy, the power of spin, and the little variations on a theme of a perfect length which brought him the glory.”

On to Old Trafford

Laker continued to bewilder the tourists, taking 20 wickets in the first three Ashes Tests before being let loose on a big-turning Old Trafford pitch in Manchester. What followed was the best bowling figures ever recorded – 19 for 90 across the match. The only wicket he did not take was that of Jim Burke, dismissed by spin partner Lock early in the first innings. It was the latter’s only reward for 69 overs of toil, while everything Laker touched turned to gold. Only one other player has ever taken all wickets in a Test innings – India’s Anil Kumble against Pakistan in 1999.