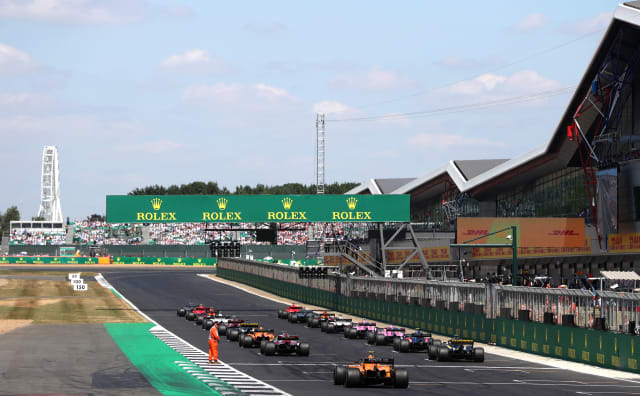 Lower-league football has moved a step closer to curtailing its season due to the coronavirus pandemic while Silverstone is shaping up for a potential Grand Prix double-header this summer.

League Two clubs have unanimously indicated they are in favour of moving towards ending the 2019-20 season after considering the attached costs of resuming the campaign.

The EFL said the fourth-tier clubs had also agreed to a framework which includes deciding the final table on an unweighted points-per-game system, and no relegation to the National League.

An EFL statement read: “Having considered the protocols and costs that would be required to be met to conclude the current season, League Two clubs have unanimously indicated a preferred direction of travel to curtail the campaign in line with the framework outlined by the EFL board.”

However, the EFL said League One clubs had not yet reached an agreement on whether to curtail or not, while the Championship teams were committed to resuming.

Silverstone has reached an an agreement in principle with Formula One to stage back-to-back races this summer as the sport looks to get its calendar back on track.

No races have been staged since the season-opener in Australia was cancelled at late notice in March, and Austria is currently slated to host the new opening race in July.

It is understood that the ability to stage the races will hinge on an exemption to the government’s 14-day quarantine for overseas visitors beyond France and Ireland.

Silverstone boss Stuart Pringle said: “I am delighted to confirm that Silverstone and Formula 1 have reached an agreement in principle to host two races behind closed doors this summer.

“However these races will be subject to government approval, as our priority is the safety of all involved and strict compliance with Covid-19 regulations.”

The Premier League is continuing to move towards a mooted start date of June 12, but England captain Harry Kane has indicated players will be looking for more information before making their own decisions on how to proceed.

“I don’t think anyone knows the right answer at the moment. I think the majority of players are looking forward to playing again as soon as possible but we know we want it to be as safe as possible too,” he told Good Morning Britain.

“Me personally, I am happy to start training in small groups if that is allowed and just trying to get back to some normality. I guess everyone is different and has their own personal view.”

World Rugby bowed to the inevitable pressures of Covid-19 on the global calendar on Friday, announcing that all fixtures in July had been called off.

For England that means no return to Japan, scene of their runners-up finish at last year’s World Cup, while Wales will also miss one Test against the Brave Blossoms as well as two in New Zealand.

Scotland had been due to tour South Africa and New Zealand, with Ireland heading to Australia. All those matches could yet be re-arranged as part of a revised schedule but the world governing body made it clear the logistical issues involved around travel, quarantine and player welfare represented a tricky backdrop.

There will be no professional tennis until the end of July after the ATP and WTA Tours extended their suspension.

The men’s and women’s tours were due to resume on July 13 following a hiatus due to the coronavirus pandemic, but that has now been extended until the end of the month.

It sees ATP Tour events in Hamburg, Bastad, Newport, Los Cabos, Gstaad, Umag, Atlanta and Kitzbuhel all cancelled while Lausanne, Bucharest, and Jurmala will not host tournaments on the WTA Tour.

Racing in Ireland will be allowed to restart behind closed doors from July 8, three weeks earlier than expected, after consultation between Horse Racing Ireland and the Irish Government.

The financial impact of the pandemic on English cricket has been estimated at a worst-case £380million and Yorkshire have become the latest county to make further cuts.

The White Rose were the first team to announce furloughs for players and cricket staff and there has now been an agreement on pay cuts of up to 20 per cent and the cancellation of overseas deals for Keshav Maharaj, Ravichandran Ashwin and Nicholas Pooran.

Yorkshire chief executive Mark Arthur said: “We do not take decisions such as these lightly, but now is the time to take drastic steps.

“The staff and players were consulted earlier this week and their reaction to the news has been fantastic.”