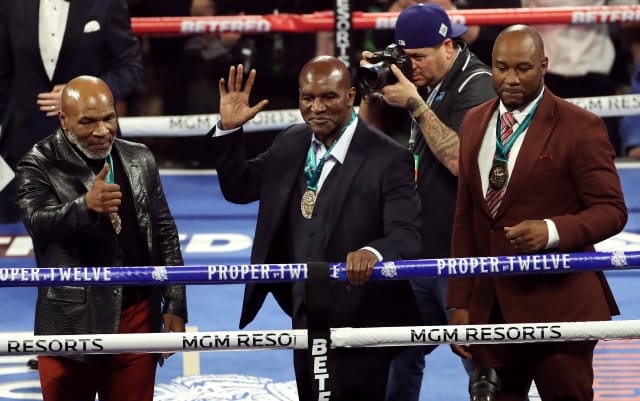 Dillian Whyte has cautioned Mike Tyson and Evander Holyfield against making professional returns to the ring, warning the former world heavyweight champions that doing so could result in serious injury.

The pair have both released videos of themselves training recently and speculation is mounting that they could fight for a third time, almost a quarter of a century on from Tyson biting Holyfield’s ear in their famous rematch.

While they are regarded as two of the finest heavyweights of their, or any, era, and broke several records between them, Tyson is now 53 while Holyfield is four years older.

Whyte can see why an exhibition match might be arranged but the Londoner argued anything further between two men who have not fought for several years would be a step too far.

Whyte told the PA news agency: “There’s so many different thoughts and ways to think about this.

“If they want to do something for charity in an exhibition match, that’s fine. But as long as they keep it like that and don’t try to get back in the professional ring.

“Because what it does, it diminishes all of their hard work they’ve done over the years. It’s like ‘you’re in your fifties now, just relax, enjoy your success and enjoy your retirement’.

Boxing is littered with examples of fighters coming back into the paid ranks after retiring but Whyte does not plan on adding to that number, insisting he will listen to those close to him if told to hang up his gloves.

Whyte, the mandatory challenger for the WBC heavyweight title currently held by British rival Tyson Fury, said: “I have a plan to get out at a certain age and not look back.

“That’s my plan and I’ve got people around me who if I ever try to go on too long, they’ll tell me straight and I’ll just walk away. If those people aren’t around me, I wouldn’t box anymore.”

:: I’ve Been There is on BBC iPlayer now and on BBC Sounds from May 20.