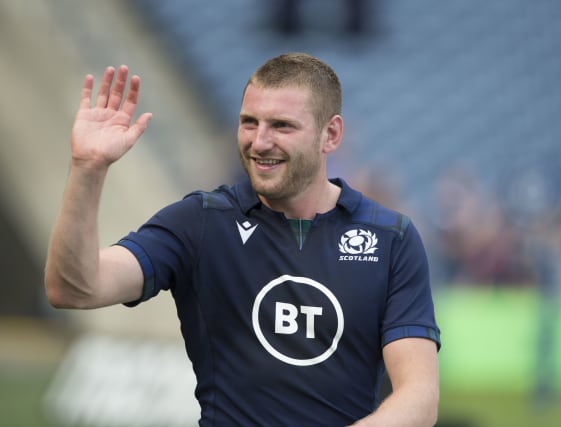 Scotland head coach Gregor Townsend delivered an upbeat assessment of Finn Russell’s international prospects after admitting he had been in regular contact with the fly-half in recent weeks.

The 27-year-old was dropped from the squad for Scotland’s Guinness Six Nations opener following a disciplinary issue and did not feature again before their final match in Wales was postponed at short notice.

The Racing 92 player claimed he had “no relationship” with his former Glasgow head coach while the tournament was ongoing and wanted to see big changes in the Scotland set-up, but Townsend gave every indication that Russell would be back on the international scene when rugby resumes.

“Players and coaches sometimes don’t have relationships that are the same all the way through. I suppose it’s like being in a family, you have highs and lows, you have periods when you don’t understand them and they don’t understand you.

“But the important thing is we leave the door open for players and we make an effort to connect and build relationships with all of our players.

“We want everybody available to us. We are gutted if a player is injured and misses the chance to play and we certainly want everyone engaged, available and keen to play for Scotland.

“It’s a massive thing in their lives and I’m sure Finn is really keen to be available and playing for Scotland, as are we with him.”

When asked about the nature of the discussions, Townsend said: “They are just regular conversations about how he is getting on, what he is up to, and making sure we just connect, like conversations you have with any player.

“He is in a different situation in Paris with some of our other players who are in Scotland. So it’s just making sure we have an open dialogue and getting to know each other better. Those connections are important.”

When asked if the whole issue could lead to him having a better relationship with Russell than ever, Townsend said: “I hope so. I am obviously keen to have good relationships and open relationships with all the players that you work with so that’s what I’d hope with any player, so in this case, Finn.”

Scotland started their Six Nations campaign with seven-point defeats against Ireland and England before beating Italy and France, and Townsend did not think Russell’s absence and the hype surrounding it cast a dark cloud over their campaign.

“You don’t know what impact it will have,” he said. “We can only judge what we saw from our players in training and games. There was a toughness about our performances and togetherness and there was an improvement from game to game, a learning about how we could get better.

“Whether we would have been the same, worse or better had events not happened, who knows? You can only speculate.

“But I have got to say the players worked really hard as a group and put everything into those four games, and the coaches worked really well. There were a lot of positives in the performances, a lot we can still improve on, but we were heading in the right direction.”