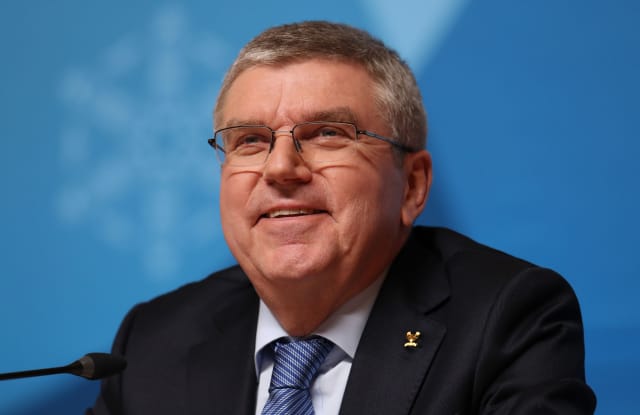 The International Olympic Committee faces a £650million bill following the postponement of the Tokyo Games to 2021.

IOC president Thomas Bach revealed on Thursday the organisation’s executive committee has set aside the sum to cover the costs of reorganisation and to support individual sports federations and national Olympic committees.

Bach said in a conference call: “We anticipate that we will have to bear costs of up to 800 million US dollars for our part of the responsibilities for the organisation of the Games.

“This amount will be covered by the IOC itself, including any funding we may have to refer to from the Olympic Foundation.”

The sum will be split into two parts, with the bigger slice of 650 million US dollars to help reorganising costs, and the remaining 150 US dollars as an “aid package” for those elements of the Olympic movement affected by the postponement.

And, as a result, a more “frugal” Games is likely to be staged, with Bach saying “everything is on the table” when it comes to looking for savings.

As discussions over football’s return continue, Brighton head coach Graham Potter has admitted to having some reservations over a return to training next week.

The Premier League held what Potter termed “positive” talks with clubs and managers on Wednesday and the governing body hopes to get the backing of clubs for its plans for ‘Project Restart’ at a shareholders’ meeting next Monday.

If all goes well some players could return to training on Tuesday, undergoing tests before working out individually or in small groups as part of Government guidelines.

But Potter said: “There are concerns, of course, because we’ve come out of lockdown, the situation isn’t totally resolved.

“But we’re human beings like everybody else, we need that clarity if we can.”

“Football isn’t necessarily a necessity – it’s a game, it’s a sport,” he told Sky Sports. “I mean, what if we go through all this rigmarole of trying to get back started, and we have a second peak and we’re stopped anyway?

“I just can’t understand after just sort of loosening the lockdown why we’re in such a rush to get it back. Why can’t we just wait sort of a month or so to see if things go to plan?”

As football looks ahead to a return, other events continue to be called off, and Thursday saw the Tour of Britain and England’s friendly against the Barbarians join the list.

The Tour of Britain was due to be staged from September 6-13, covering a route stretching from Aberdeen to Penzance, but will now not take place until next year.

A statement said: “Across the UK there are significant doubts around the potential to stage large-scale public events and gatherings such as the Tour of Britain as early as September and while any form of social distancing remains in place and there isn’t a vaccine available, people’s health and safety must come first.”

England’s regular summer fixture with the Barbarians, due to take place at Twickenham on June 21, has also fallen.

“The match is due to be rescheduled to later in the year, subject to government guidelines and broader international match scheduling,” a statement read.

However, European rugby chiefs say they are still intent on completing this year’s Heineken Champions Cup and Challenge Cup tournaments.

Both events have been frozen at the quarter-final stages since early April but European Club Rugby say they are working towards staging finals on October 16 and 17 respectively.

In addition, the organisation has confirmed that is considering a potential revamp of the format for its continental competitions for the forthcoming season.