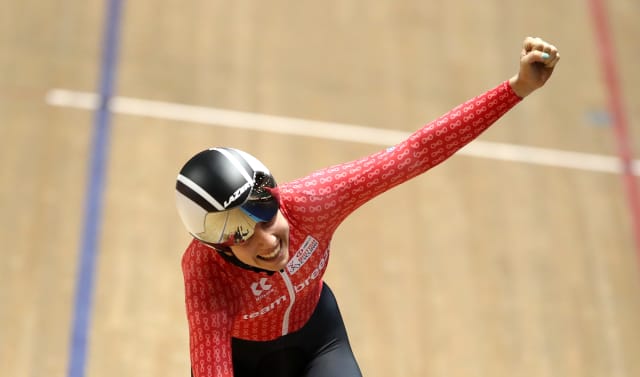 The postponement of the Tokyo Olympics has given Josie Knight hope of being on the plane to Japan next summer, but two years ago the 23-year-old was wondering if her cycling career was over.

Knight joined Great Britain’s podium programme before this year’s UCI Track World Championships in Berlin, getting the call when Laura Kenny broke her shoulder in January, and has now graduated to the elite group full time.

But rewind to 2018 and what Knight calls a “strange, crazy journey” – one that began in the green, white and orange of Ireland – almost ended.

Knight was born near Aylesbury but her family moved to Dingle, Co Kerry, when she was 18 months old. She took up racing on an Irish licence, then got a passport so she could compete at the European Youth Olympic Festival in 2013.

“At the time I wasn’t really thinking, ‘Right, that’s me declaring for Ireland’,” she said. “I just wanted to go to the event. You got a big suitcase full of kit!”

Knight soon found herself a fully-fledged member of Team Ireland, winning European individual pursuit silver as a junior, claiming national titles, and competing at the 2015 and 2016 World Championships.

But there was always a caveat – Knight never considered herself Irish, and as retirements broke up the team pursuit squad after the Rio Olympic cycle, she was left at a crossroads.

“There wasn’t any development happening and it was all a bit grim,” she said. “I didn’t want to continue to be mediocre with Ireland when I felt British.”

Knight wrote to the UCI to change her affiliation, knowing there was no road back if things did not work out.

Knight had been rejected by British Cycling as a junior but approached them again. They were interested, but before inviting her on to the academy they demanded to see results that summer.

The problem was, Knight could not produce any – unable to compete after handing her track bike back to Ireland.

Inevitably, that September the answer was ‘no’.

“To me, it was the end of the world,” said Knight. “I wrote to them and said, ‘I’ve got no results because I’m not living at home, I can’t race, I’m just training in the hope you give me a chance’.”

She was offered the lifeline of a trial but the hurdles kept coming.

Coaches demanded to see an individual pursuit time of three minutes 37 seconds, two seconds better than anything Knight had previously clocked and then, as she struggled to deliver it, raised the bar again.

“Two weeks before the Track Nationals, Chris (Newton, coach) came up to me and said, ‘Right, we’ve not seen anything special from you so far,” she said. “If you want to get on the programme you’re going to have to do a 3:34’.

“I thought it was all over. I was thinking they were setting impossible targets because they didn’t want me.”

With nothing left to lose, she threw everything she had at the Nationals and delivered on the Manchester boards with a 3:33.707. Knight was in the academy.

She has not looked back since, and in January claimed the British individual pursuit title with a time of 3:32.771, just as an opening with the podium programme appeared.

Initially Knight saw it as a learning opportunity, the gap to Tokyo too short to make a full impression, but postponement gives her an unexpected chance.

“My goals for the year as an academy rider were the Lincoln GP and maybe a Belgian race,” she said. “Within hours it was about aero training and a skinsuit fitting and looking ahead to the Olympics.

“It’s really exciting but I’ve got a lot of catching up to do…I’m fully aware I’m now team-mates with some incredible athletes, Olympic champions. I just want to see how far I can go.

“Whether or not I make the team, I just want to make the most of the year I’ve been given and see how far I can take it.”