The leading candidates to replace Sebastian Vettel at Ferrari 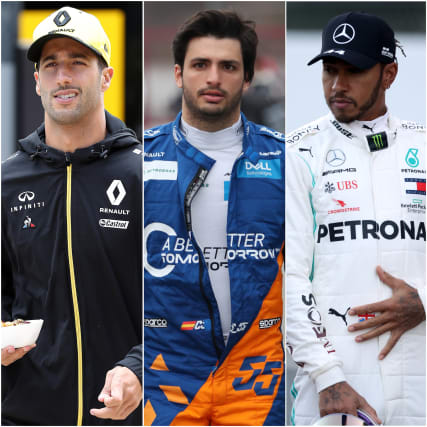 Sebastian Vettel is to leave Ferrari at the end of the season after revealing there was “no longer a common desire to stay together”.

The German’s departure leaves the Formula One giants on the lookout for a new driver while the future of Vettel, a four-time world champion, remains unclear.

Here, the PA news agency looks at who could be the man to partner the exciting Charles Leclerc at Maranello.

Vettel’s former Red Bull partner could well be the man to take his seat at Ferrari. The Australian made the switch to Renault ahead of the 2019 season, a campaign that proved frustrating for the 30-year-old as he racked up just 54 points in finishing ninth in the drivers’ standings. Ricciardo has a dazzling quality which could appeal to Ferrari’s adoring tifosi and he would surely jump at the chance to step into a car that can contend for race wins again, but whether the Australian – who had a fierce battle with former Red Bull team-mate Max Verstappen – would accept playing second fiddle to Leclerc is another matter.

The 25-year-old replaced compatriot Fernando Alonso in a struggling McLaren ahead of the 2019 campaign. It was one of relative success for the British team as they began to show signs of life after years of poor results. Sainz was particularly impressive, finishing in sixth as best of the rest after the two Mercedes and Ferrari drivers and Max Verstappen. He is believed to be out of contract at McLaren at the end of the season and a switch to Ferrari could be too tempting to turn down.

The Italian, a former reserve driver for Ferrari who currently drives for the affiliated Alfa Romeo Ferrari team, ticks a lot of boxes. The 26-year-old scored 14 points for Alfa Romeo last season and his appointment would be a leap of faith from the bosses at Maranello, given he has just one full season under his belt in Formula One. They may view him however as someone who would fit seamlessly into the team and act as the support man for the talents of Leclerc.

The six-time world champion has his sights set on matching Michael Schumacher’s tally of seven world titles. What better place to achieve that than with the prancing horse? Hamilton is out of contract at Mercedes, where he has won five championships, after this season. Ferrari admitted last year that talks over signing Hamilton had taken place, although he would challenge the team dynamic with Leclerc. Hamilton’s relationship with Mercedes means the likelihood is he will re-sign with the German giants, although could the lure of Ferrari prove too strong?

The Spaniard, even at 38, always figures in conversations when a team has a vacancy. The two-time world champion, widely regarded as among the best Formula One drivers of all time, left the sport after the 2018 season after years of disappointing results in underperforming cars. Alonso has made a bid to emulate Graham Hill and win motor racing’s Triple Crown. With the Monaco Grand Prix under his belt, Alonso has won the 24 Hours of Le Mans races for the last two years, leaving only the Indianapolis 500 to clinch. Alonso drove for Ferrari between 2010 and 2014, just missing out on the title in his debut season before bemoaning the teams’ lack of performance in later years. Whether he would want a return to Formula One and whether Ferrari would go back to him at this stage are major questions, but he could be part of the conversation.

What next for Vettel?

The German had the world at his feet during an all-conquering spell with Red Bull, where he won four titles in succession. Vettel set his sights on chasing down compatriot Schumacher’s haul and joined Ferrari in 2015 as part of that mission. Despite a promising start, the last two seasons have been punctuated by a string of errors, often costing Ferrari a chance to compete to end their long wait for the championship. He was outperformed by the 22-year-old Leclerc last season. Vettel may follow Alonso’s lead and enter other formats. If he stays in Formula One, a potential move for Sainz to Ferrari could open a door at McLaren.