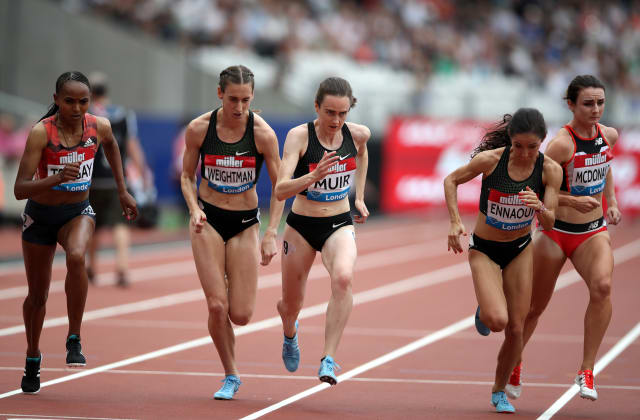 The Anniversary Games has been cancelled in the latest concession to coronavirus, but wide-ranging discussions continue regarding the possible return of Premier League football.

The decision not to hold the Diamond League event at the London Stadium on July 4 and 5 is a major blow to UK Athletics, albeit a seemingly inevitable one given the issues attached to bringing competitors in from all over the world.

UKA chief executive Joanna Coates said: “Cancelling the event will have a significant financial impact on UKA and the wider sport. There will be a substantial reduction in income from the cancellation of this event and this will have an impact moving forwards.”

This year’s Diamond League has been reformatted as a result of cancellations, with the planned final in Zurich also scrapped.

The prospect of top-flight football remains alive as stakeholders from within the game continue liaising with police and Government representatives.

Further talks between the parties have been held to explore “a range of options” which could reopen the possibility of home and away matches in any resumption.

DCC Roberts said in a statement to the PA news agency: “Following a positive meeting between police, government and football last night, we will be jointly exploring a range of options to identify a way forward, which minimises any risks to public safety and unnecessary pressure on public services, but facilitates a sensible restart to the season, to support the economic and morale benefits associated with the sport.”

London Mayor Sadiq Khan sounded a more cautious note, coming out against the idea of playing matches in the capital at this stage of the response.

His spokesperson told the Evening Standard: “Sadiq is extremely keen for the Premier League and professional sport in general to resume. However, with the country still in the grips of this crisis, and hundreds of people dying every day, he believes that it is too early to be discussing the resumption of the Premier League and top-flight sport in the capital.

“As a Liverpool fan, Sadiq of course wants the Premier League to return, but it can only happen when it is safe to do so, and it cannot place any extra burden on the NHS and emergency services.”

The England and Wales Cricket Board is seeking answers of its own for the recreational level, which is currently on indefinite pause.

“We are expecting to receive further clarity from the UK government in the coming days and in turn we will share greater detail and guidelines with the game as soon as we are able,” it said.

“We completely understand the level of patience that recreational players have had to demonstrate so far, and know that most will be desperate to return to the nets to practice. We ask for a little more time to plan out the best way to deliver this opportunity to everyone as safely as possible.”

Rugby union authorities in the Republic of Ireland have urged those involved in the sport to “hold firm” – echoing a line from the country’s health service executive.

“It’s a rallying cry that the IRFU fully support as we continue to take the steps that will protect our communities and save lives,” said Colin McEntee, head of rugby development in a statement.

“Under the roadmap, rugby can work to resume in Phase 5 on a preliminary date of August 10th. Many of you want to know exactly what that means and want to know if rugby clubs can open as amenities or for non-contact activities under earlier phases of the roadmap. We are working hard to provide answers to these questions.

“This will define what happens next for Irish Rugby. I look forward to updating you soon, but in the meantime, ‘hold firm,’ and stay safe.”