On This Day in 2008: Manchester United clinch Premier League title at Wigan 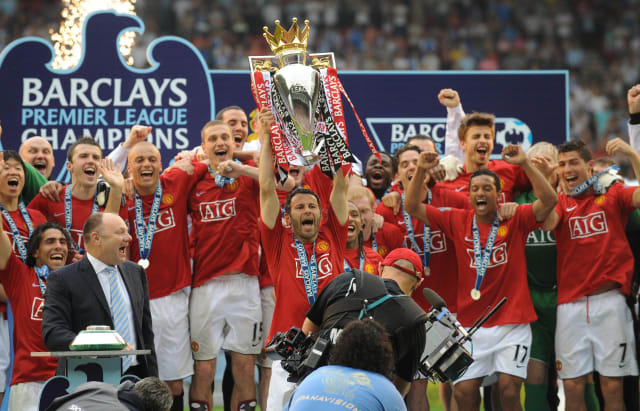 Ryan Giggs enjoyed many wonderful days in his playing career, but May 11 2008 must be high on the list.

On the day the Welshman equalled Sir Bobby Charlton’s appearance record of 758 for Manchester United, he also scored the decisive second goal as United won 2-0 at Wigan to clinch the Premier League title.

Giggs started the afternoon on the bench at the JJB Stadium, but when the Lancashire skies opened, Sir Alex Ferguson’s horse-racing instincts kicked in.

“As soon as the rain came down, I knew I should get Giggsy on because he loves the soft ground,” the Scot said.

United had led since Cristiano Ronaldo’s 33rd minute penalty – the Portuguese forward’s 41st goal of the season – but were not being given a comfortable afternoon by Wigan.

United old boy Steve Bruce, stood in the Wigan dugout, was baying for a penalty when Rio Ferdinand handled Antonio Valencia’s shot after 23 minutes, then despaired when referee Steve Bennett failed to show Paul Scholes a second yellow card for a clear foul on Wilson Palacios nine minutes before the break.

“You should ask the referee about his integrity, not about my team,” a furious Bruce said afterwards.

Chelsea no doubt would have had a view too. Avram Grant’s side, having beaten United 2-1 at Stamford Bridge a fortnight earlier, began the day level on points with Ferguson’s side, albeit with a vastly inferior goal difference.

It all added up to plenty of tension all round, tension that only grew for United as they struggled to put Wigan away.

“We had some nervous moments and then the rain came and anything could have happened then,” Ferguson said. “We started to get a grip of it after half-time, though. I was thinking, ‘Please give me the second goal’.”

And who better to do it than Giggs, a player signed by Ferguson as a schoolboy over 20 years beforehand.

“It was an important goal because it gave us a two-goal margin,” Giggs said. “But I’m not bothered about records, it’s about championships. I’ve got 10 now and just hope I can win another one.”

In fact, he would win three more before ending his playing career in 2014.

And further success followed for United only two weeks later as they got one over Chelsea again, beating the Blues on penalties in Moscow to win the Champions League.