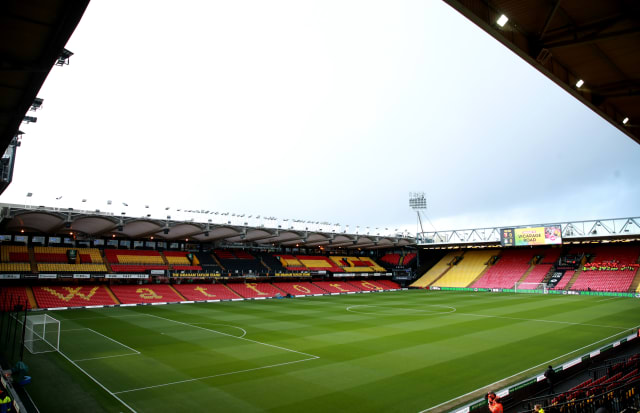 Fears of unfairness, fan exclusions and tough financial choices continue to darken the sporting landscape as it struggles to plot a way through the coronavirus crisis.

Watford have become the latest club to question the Premier League’s ‘Project Restart’, while world champion Lewis Hamilton has warned Formula One races without spectators will be “worse than a test day”.

Meanwhile former England captain Alec Stewart has suggested county cricket should write off its season entirely in a bid to protect against financial implications for years to come.

Watford chairman Scott Duxbury has joined officials at Brighton and Aston Villa in reacting with scepticism to proposals to play the remainder of the top-flight season in England at neutral venues.

Watford sit 17th in the paused table, ahead of Bournemouth only on goal difference, and the idea of resuming in the suggested format has not gone down well.

Duxbury said: “When at least six clubs – and I suspect more – are concerned about the clear downside and the devastating effects of playing in this kind of distorted nine-game mini-league, then I believe the Premier League has a duty of care to address those concerns.

“If we start and finish a whole season under these conditions and at neutral venues when everybody knows the rules when we start, not created in a time of crisis, then that is clearly fair. To be asked to finish a quarter of the season under new rules and conditions is an entirely different proposition.”

With the F1 season scheduled to get going behind closed doors in Austria on July 5, it could be a difficult weekend with Renault driver Daniel Ricciardo predicting “chaos” due to so many drivers’ eagerness to return.

But for Hamilton it will be a bitter-sweet moment. In a Mercedes Youtube interview, he said: “Around the world all the races we go to, the more fans are there the more atmosphere you have. It’s going to be very empty.

“For us it’s going to be like a test day, probably even worse than a test day. But racing is racing… I really do miss it.

“What’s great is getting messages from people around the world who are really struggling in the situation not being able to watch sports.”

Stewart, Surrey’s director of cricket, says counties may have to face up to the prospect of dismissing the current campaign in order to safeguard the domestic sport’s long-term future.

The professional game in England and Wales remains suspended due to the coronavirus pandemic and will not start until July 1 at the earliest.

In an interview with the Telegraph, Stewart said: “If the county cricket is not a cost effective exercise then I can understand why there would be opposition and the view ‘why not save money and play next year?’

“Tough decisions have to be made for the health of individuals but (also) the health of the game. Those tough financial decisions will not just be about this year but will be important for the next five years as well.”

In the United States, Saturday’s controversial UFC 249 event was hit by a positive test for Jacare Souza, who was due to fight Uriah Hall on the preliminary card.

The Brazilian, as well as two of his cornermen, are asymptomatic but have come back positive in routine testing. In a statement, UFC said those affected had left the host hotel and will be remotely monitored as they self-isolate.

There was at least one bright spot for sport on Saturday as the football season returned behind closed doors in the Faroe Islands, which has no currently known cases of the coronavirus.

Meanwhile, October’s delayed Vuelta a Espana has issued a revised route, with a Portuguese leg no longer going ahead. Stages 15 and 16 have been amended to remove Porto, Matosinhos and Viseu from the schedule.

“It’s a shame not to be able to visit Portugal in 2020, but we don’t want this flame to be put out: we will keep this relationship alive, we will maintain and develop the links we have formed, so that we may return to this country that has treated us to well,” said race director Javier Guillen.