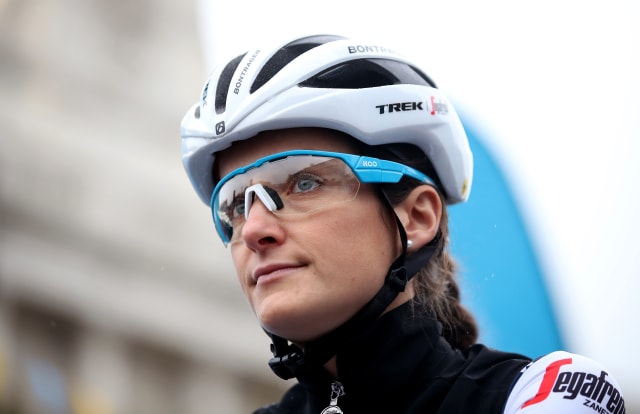 Lizzie Deignan believes the announcement of a first ever women’s edition of Paris-Roubaix shows the sport can still make progress amid the uncertainty caused by the coronavirus.

When the UCI announced a revised 2020 WorldTour calendar on Tuesday several races were understandably cut, but there was one huge addition as the ‘Hell of the North’ made it on to the women’s calendar for the first time – scheduled for October 25, the same day as the men’s race.

While it remains to be seen how much of the calendar becomes reality as the situation regarding the coronavirus pandemic develops, it is a symbolic step either way.

“It shows all the hard work of the last few years from the UCI and the Women’s World Tour hasn’t gone to waste and there is still a priority to push the sport forwards.”

Even if the UCI’s plans for 2020 prove wishful thinking, Deignan is taking the announcement as a statement from organisers ASO that a women’s edition will take place at the next opportunity.

“Whether it goes ahead this year or not, there is a clear commitment now,” the former world champion said. “You can’t go backwards; there’s no excuse next year not to host it.”

Deignan has immediately made the cobbled classic one of her key targets as she considers where she might get to race in this curtailed campaign.

She also has her eyes on the World Championships in late September before the three Ardennes Classics – La Fleche Wallonne, Liege-Bastogne-Liege and the Amstel Gold Race.

In all, the UCI has crammed 37 days of competition into a little over three months between August and early November, and Deignan – who took 2018 out following the birth of her daughter Orla before returning to action in April last year – is keen to race as much as possible.

“My first thought when I saw the calendar was, ‘Ooh, I’m going to be busy’,” the Trek-Segafredo rider said. “I want to race and I need to race. I can’t go another season with hardly any racing. I need the speed and the race rhythm.

“Some people will get it right in their preparation and others won’t but that’s what sport is all about – peaking at the right time. We’ve just never had to peak in October before.”

Deignan has been training steadily during lockdown, but has enjoyed a few rest days this week in a period where she would normally take a break after the Tour de Yorkshire – a race originally scheduled for last weekend.

She will be getting back out on the bike again now, but even with the new calendar providing clear targets, it is too early to accelerate her workload just yet with nothing scheduled before August 1.

A lot can happen between now and then, so Deignan is not getting too carried away.

“If I was to analyse it too much I’d think about how much I worked all winter and then didn’t get to race,” she said. “What happens if I do all that work again and don’t get to race? You’ve just got to be optimistic and look towards the calendar.