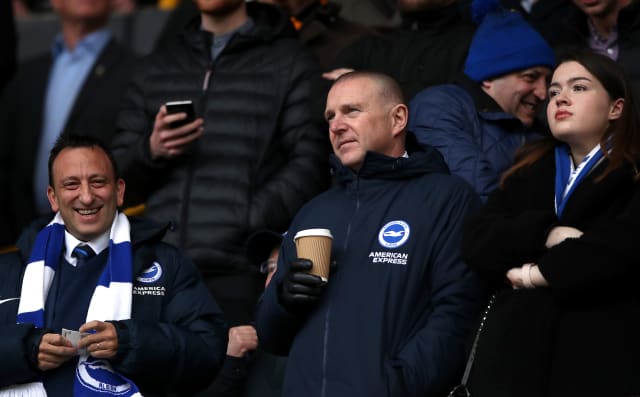 Brighton chief executive Paul Barber insists it is not just clubs fighting for Premier League survival who oppose the completion of the season at neutral venues.

The Seagulls boss remains opposed to finishing the 2019-20 campaign on anything other than a home-and-away basis, even though Premier League clubs are understood to have been told the use of eight to 10 neutral venues is the only way it can be done in a way which satisfies the Government and emergency services amid the coronavirus pandemic.

Sheffield United manager Chris Wilder said clubs had “taken a line on their position in the division” but Barber said teams higher up the table shared his view that playing at neutral venues was a step too far in terms of sporting integrity.

“There are clubs at different levels of the league that have objections to neutral venues and I think there is concern about the fairness element,” he said.

“The reality is we are three-quarters of the way through the season. In our case we have got four of the six biggest clubs not just in the league but in Europe at our ground.

“Traditionally we’ve done OK against those teams largely. It’s not just about the crowds, the statistics are very clear – there is a clear advantage from being on your home venue. To strip that away feels unfair.”

Brighton had home games against Arsenal, Manchester United, Liverpool and Manchester City among their final league fixtures at the Amex Stadium.

Premier League clubs will gather for a pivotal meeting on Monday, when a decision on whether to complete the season on a neutral venues basis is set to be made.

Barber added: “It is important over the next few days that we start to see a complete picture of everything we are being asked to agree to.

“We totally understand there are going to have to be compromises but what we can’t do is support something that will jeopardise our place in the Premier League and make it harder for us to stay in what is already a very tough competition.”

Brighton’s technical director Dan Ashworth said there is more to being at home than just playing in front of a supportive crowd.

Blades boss Wilder told the Keys and Gray show on beIN SPORTS that his chief executive, Stephen Bettis, had shown enormous enthusiasm for completing the season “and not just because we’re in the position that we are”.

He added: “I think everybody that is in the know understands the implications if this season was scrapped. From a financial point of view and from a social and moral point of view as well.”

Asked how he would feel if one of his players felt uneasy about restarting the league, Wilder said: “If any individual player came to me and said ‘it’s not for me’ I’d respect that.”

Wilder believes playing on would benefit the wider game, not just the Premier League.

“I’ve obviously had experience of working in all levels of football and I do understand the implications if the Premier League didn’t restart – the effect that that would have down the pyramid as well. We’ve got to look after all aspects of football.”

Shadow sports minister Alison McGovern has called on the Government to step in to prevent clubs going bust as a result of the crisis.

“If we don’t take action now to support the base of the pyramid, the pyramid will collapse,” she said.

“The Government really does have to get involved or we risk a major crisis for sport two or three years down the line.”

The German Bundesliga will resume on May 16 after it received the green light from federal government on Wednesday.